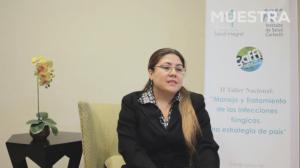 with the support of the GAFFI proposal, in less than 24 hours and in only 3 months, we have diagnosed and treated 17 patients with a fungal or TB infection.”
— Dr. Lourdes Fong

MANCHESTER, UNITED KINGDOM, October 2, 2017 /EINPresswire.com/ — The Global Action Fund for Fungal infections, GAFFI,has been operational for 4 years and among its many successes, none is more important or indicative of its work, than directly saving lives in Guatemala. This program of implementing well known diagnostic tests in a reference laboratory, has picked up 139 life-threatening fungal infections in AIDS. By also ensuring all the antifungal drugs are also available, and educating the doctors about fungal disease. This program covers the whole country. And other Latin American countries plan to mirror it – in Panama, Salvador, Nicaragua, Honduras and Ecuador. GAFFI’s new brochure outlining the problems, and its solutions has just been launched in English and Spanish.

HIV carries much stigma in Guatemala. One of the patients who benefitted from the GAFFI program said: “I am César, I am 35 years old. I used to work in a cattle farm, over 450 km from the capital of Guatemala. At first, I had a lot of headaches, a fever and sweating at night. I feel so bad that I even lost consciousness. Because of this I went to a public hospital where the doctors told me that I had cryptococcal (fungal) meningitis. There they helped me and I received treatment. At present, I feel good and I want to start working again. I am very grateful for the care I received from the doctors and the GAFFI project.”

Dr. Lourdes Fong, Directora Unidad de Atención Integral Petén, Guatemala said “The HIV care unit, which I am in charge, is located 465 km from Guatemala City, in one of the most remote parts of the country, near the Tikal ruins. In our HIV Unit, one year ago we only diagnosed five patients with an opportunistic infection; but now with the support of the GAFFI proposal, in less than 24 hours and in only 3 months, we have diagnosed and treated 17 patients with a fungal or TB infection. The patients have benefited greatly and improved their survival and also their response to anti-HIV treatment.”

Professor David Denning, GAFFI’s President, also of The University of Manchester, stated: “GAFFI is primarily focused on evidenced-based advocacy to improve the outcomes of patients with fungal diseases, across the world. The national fungal diagnostic program in Guatemala is the first in the world and will be followed by others, Kenya and hopefully Uganda. By showing that the combination of rapid diagnosis and access to antifungal medicine in the hands of educated doctors saves lives, is GAFFI’s main middle term aim.” He has recorded a message with detailed comments.

Notes to Editors:
For more information please contact Susan Osborne, Director of Communications, The Goodwork Organisation on Tel: (+44 (0) 7836 229208) or via email on susan.o@thisisgoodwork.org

GAFFI is a charitable foundation (NGO) focused on reducing deaths and illness caused by fungal disease. Fungal diseases are neglected worldwide by public health authorities. GAFFI efforts are directed at:

1. Identifying and publicising gaps in diagnostics and treatments for fungal diseases.
2. Consulting on how healthcare could be improved through facilitating training, encouraging companies to expand their markets and recommending improvements in infrastructure.
3. Estimating the burden of serious fungal diseases, country by country. Over 68 country estimates are complete, and many of these are published
4. Developing, implementing and evaluating countrywide diagnostic programs – Guatemala (fungal infections in AIDS) the first.
5. Influencing national and international agencies to ‘adopt’ fungal diseases alongside existing programs including TB, microbiology, AMR, NTDs and incorporation of key generic antifungals onto the WHO Essential Medicines List.
6. Focusing diagnostic improvements for GAFFI’s priority diseases.

GAFFI issued a 10-year Roadmap in 2015 calling for ‘95-95 by 2025’, summarized as 95 per cent of patients with serious fungal infections are diagnosed and treated. http://www.gaffi.org/roadmap/