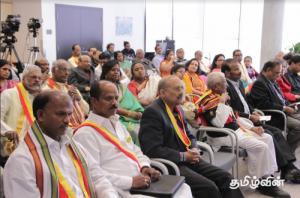 The Transnational Government of Tamil Eelam's (TGTE) Parliament which concluded its three- day session in Canada has worked out key political strategies it must pursue to achieve its objectives.

The eighth direct session of the second tenure of the TGTE Parliament was held on the 19th, 20th and 21st of January at the City of Markham’s Aaniin Community Centre on Vanni Street, Markham, Toronto, Canada.

Among the participants were TGTE Members of Parliament from various countries of the world along with members of the TGTE Senate, members of the Advisory Committee, academia and renowned historians.

Mr. Rudrakumaran, the TGTE Prime Minister, had, in his opening-day address, insisted on the necessity, by way of basic ethics and political strategy, for organizations fighting for the realization of the Tamil people’s right to self-determination and for securing remedial justice for Mulivaikaal genocide through political and diplomatic means, to subject their formations and activities to conform to democratic norms and values.

The Work Reports of each ministry, the observations and motions from the Senate members and many other topics were placed before Parliament and discussed.

The session reached decisions on key political strategies to be worked out by TGTE in order to keep pace with contemporary developments – the modalities for these new strategies will be revealed and become apparent in the near future.

The TGTE Prime Minister further enumerating on TGTE’s priorities had this to say to Tamils living Canada:
“The Tamil people living in Canada are obliged to play a great role in winning the liberation of our Homeland. We should act in such a way as to utilize the liberal order, the political space and the political network available in Canada to further the cause of the political liberation of the people of the Homeland.”

The public and the various representatives of the Tamil community who had the opportunity to watch the sittings on the three days, either directly or through media, have come to place new faith and trust in the TGTE which, they feel, has clearly charted the right course and is going in the right direction to win Tamil Eelam.