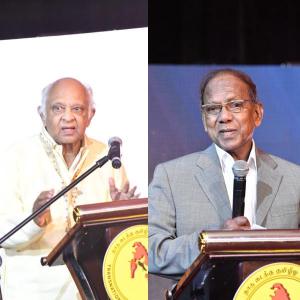 The Sinhalese is the first cousin of former President Kumaratunga & the Veteran Tamil leader was imprisoned along with late S.J.V. Chelvanayagam in 1958 & 1961

A Sinhalese who is a first Cousin of former President Chandrika Kumaratunga and a Veteran Tamil political leader who was imprisoned along with late Tamil leader S.J.V. Chelvanayagam in 1958 and 1961 received prestigious awards from Transnational Government of Tamil Eelam (TGTE) at an event in Canada.

Professor Dr. Brian Seniveratna, is the first cousin of former President Chandrika Kumaratunga and a nephew of two former Prime Ministers, was given the Nelson Mandela Memorial Award to honor his lifelong commitment to fight injustice against Tamils.

“We hail Dr. Senewiratne as the voice of reason of the Sinhalese” said TGTE Prime Minister Mr. Visuvanathan Rudrakumaran.

When Dr. Senewiratne saw the rights of Tamils were impinged upon by successive Sinhalese governments of Sri Lanka and Tamil's peaceful democratic protests were put down by government-sponsored pogroms and by military force, he made it his mission to defend the rights of Tamils to live with equality, dignity and security and without discrimination in the country of their birth, enjoying the same rights and privileges accorded to the Sinhalese community.

In 1972, as Professor of Medicine at the University of Peredeniya he took up the cause of Tamils, when they were hounded out of their dwellings by Sinhalese goons during the term when his aunt Mrs. Sirimavo Bandaranaike was Prime Minister. He did what he impishly referred to as, “my nocturnal ward-round” wherein he traversed the streets of Kandy picking up dying Tamils, so that they could be given immediate medical attention in hospital and if they could not be saved to die with dignity.

As a recognition of his commitment he was appointed as a Senator in the Transnational Government of Tamil Eelam (TGTE).

Karikalan's involvement with Tamil struggle started when he was a high-school student in 1958. He was arrested in 1958 for his protest against Sinhala-only Sri activities, along with Tamil leaders like late S.J.V Chelvanayagam (Thanthi Selva) and late Vanniasingam. It should be noted that this was the first struggle when Tamils were arrested and imprisoned for political reasons.

Mr. Karikalan continued his active involvement with Tamil struggle and took a leading role in Tamil's major non-violent struggles, including the 1961 Non-Violent campaign called Satyagraha, when Sri Lankan Government was completely paralyzed in Tamils homeland of North-East for three months, due to peaceful protests of Tamils demanding rights. Sri Lankan Government declared the State of Emergency, arrested Mr. Karikalan and Tamil leaders like S.J.V. Chelvanayagam and Vanniasingam. They all were imprisoned in a Military Camp in the South called Panagoda. Karikalan was only 20 years old and was the youngest prisoner. He was released when other leaders were released after six months in custody.

It should be noted that Mr. S.J.V. Chelvanayagam himself personally went to the Supreme Court to wish and congratulate Mr. Karikalan when Karikalan took oaths as an Attorney-at-Law. After he became an Attorney-at-law, he worked closely with Tamil leaders, including S.J.V. Celvanayagam. He was part of the team that drafted major documents for the Federal Party. He personally spent time with S.J.V. Chelvanayagam discussing and drafting important documents and agreements on Tamil demands.

When Tamil youths got involved in struggle against discrimination in University admissions, he became one of their main lawyers and assisted them at great risk. He defended several leading Tamil youths in courts, including Pon Sivakumaran, Thangathurai and Kuttimani. As a mark of respect to Karikalan, Thangathurai named his son Karikalan when he was sentenced to death by the Sri Lankan Government. It should be noted that Thangathurai, Kuttimani and 52 Tamil political prisoners were killed by Sinhalese Prisoners – with the help of Sinhalese Prison Guards – inside Welikade prison during 1983 pogrom against Tamils .