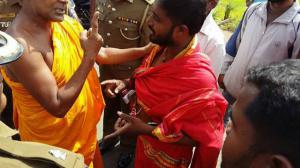 Sinhala Buddhist Came with Many Sinhalese, Using a Technique of Intimidating the Tamils, Before Seizing the Tamils’ Land

It already happened in Bosnia, Serbians seized Kosovo from Albanians 1400 years ago. Serbia was forced to leave Kosovo. It will happen to the Sinhalese too.

NEW YORK, NEW YORK, USA, October 7, 2018 /EINPresswire.com/ — The Seizing of Tamil Lands by Sinhalese is an International Crime and the Sinhalese Need to Return to their Homes, South of Sri Lanka

The Sinhalese war and riots against the Tamils is genocide. This has been documented by UK Channel 4 video. Most experts on genocide have agreed that Sri Lankan killings were genocide in 2009 and in the past. These experts studied other genocidal wars in Kosova, South Sudan, and Bosnia.

These land seizures have been occurring since 1948, following independence from the British.

The Sinhalese living in Tamil lands should return to their home. As of now the UN has a report detailing war crimes by Sinhalese. It was prepared by UN Secretary General Ban Ki-Moon. The United Nations Human Rights Council has a solid body of evidence against the Sinhalese. The UNHRC may refer the Sri Lankan war crimes to the International Criminal Court.

It is expected that there will be a decision by the UN or UN member states to remove all Sinhalese from the seized lands in Tamil Homeland.

It already happened in Bosnia after the genocide by Serbians, through the Dayton Agreement of 1995. Serbians seized Kosovo from Albanians 1400 years ago. But in 1995 Serbia was forced by the US and NATO to leave Kosovo. It will happen to the Sinhalese too. Unless they leave now, it will be violent.

We therefore urge the Sinhalese to leave the captured land, farms, and fishing waters. It would pave a route for a peaceful and amicable resolution for this ethnic war.