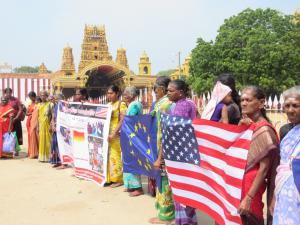 Tamils in Sri Lanka with US flag and Portrait of POTUS 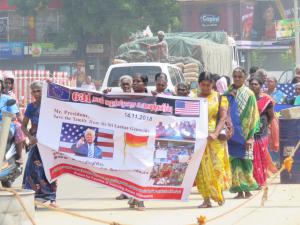 Tamils are calling for US help

NEW YORK, NEW YORK, USA, November 29, 2018 /EINPresswire.com/ — SL Tamils are Inviting the U.S. to Save them from Chinese Invasion; the United States Should Consider this for Mutual Interest of Tamils and Americans

First of all, India does not have guts to do anything about the Sri Lankan crisis or a Chinese invasion. They are a detached watcher of what is occurring in Sri Lanka.

Both major Sinhalese political parties are pro-Chinese. Clearly Ranil Wikramasinghe is the one who agreed to hand over the Hambantota port and signed a 99 years lease arrangement with China. Presently the Chinese are utilizing it as their maritime port.

As we all know, recently chosen Prime Minister Mahinda Rajapaksa is a dear companion of China. The Chinese gave millions of dollars during 2015 presidential and parliamentary election. The Chinese aided Rajapaksa’s regime and helped him during the ethnic war against the Tamils.

The U.S. doesn't gain any benefits from Sri Lanka, but Sri Lanka utilizes the American capacity to escape from war crimes and for other trade advantage.

Tamils are terrified that Sri Lanka, in order to reimburse the loan, will give the Trincomalee harbor and numerous strategical areas in the Tamil inhibited region to China for an additional 99 years.

Tamils are strongly opposed to China’s invasion of their homeland. Any assistance given to the Tamils by the U.S. would help the international community freely use the Malakai Way sea lane in Indian Ocean. If proper a political solution is addressed, Tamils will have their territory either by US-style federalism, Bosnian-style federalism, or an autonomous nation.

Tamils do not have faith in current TNA leader Mr. Sampanthan and his assistant Mr. Sumanthiran. Many believe that these two politicians have sold out for positions and perks. In the last local election, the TNA lost its mandate from Tamils from 75% to 33%.

Now is an optimal time for the U.S. to come to Sri Lanka directly address this issue. Tamils are willing to sign 99 years of assurance from the US to shield them from China. The world will welcome the U.S. putting its full commitment into this worthy cause.