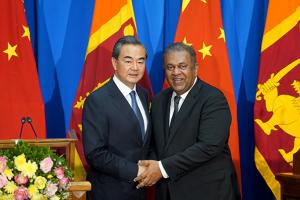 1. The Tamil should decide what kind of government they want through a UN sponsored referendum.
2. In March 2019, Sri Lanka should accept a war crimes investigation through the International Criminal Court to find a justice for the Tamils who lost their loved ones through killings and disappearances undertaken by the Sri Lankan army.

It has been ten years since the end of the war. The promises made by Sri Lanka to UN and USA have not been implemented. Since independence from Britain, Sri Lanka and the Tamils have had many agreements to achieve the reasonable political solution, but Sri Lanka has never honored those. It is simply Sri Lanka prolonging the process until they change the North-East demography by settling the region with more Sinhalese, attaching Tamil villages to Sinhalese districts. This created a genocidal war that caused many Tamils to flee to the West.

The Sinhalese leaders from both parties publicly have declared that no army will be prosecuted or imprisoned for war crimes in 2009 and before 2009. Therefore, Sri Lankan war crimes should be investigated by International Criminal Court. This will allow for justice for the Tamil victims.

The US has the leverage along with Japan and IMF. The US should use its power to force the Sri Lanka to agree with above-mentioned proposal.

In Sri Lanka the political crisis was created by current President Sirisena when he wanted to change the prime minister from Ranil to Mahinda Rajapaksa.

It is a victory for US and European Union. It shows that western power has decisive influence in Sri Lanka. But in the past former US ambassador Robert Blake had told the Tamils that US does not has any leverage with Sri Lanka.

But if the US insists on an agreement between Sri Lanka and Tamils with the US as signatory, it will happen.

The Sri Lankan team headed by Mangala Samaraweera is coming to Washington D.C. to receive MCC funding along with a $1.5 Billion loan over 3 years from the IMF. Mr. Samaraweera had promised the pro-government Tamil diaspora (USTPAC, CTC and GTF) that the North-East merged federal arrangements to settle the ethnic crisis for good. However, when the time came for Mr. Samaraweera, he switched his portfolio from Foreign Minister to Finance Minister. Mr. Mangala Samaraweera can consent to anything for his personal advantage, but when the time come to deliver on his promises, he disappears from that position. He is a manipulative liar. The US and IMF need to be cautious and ought to not consider his guarantees trustworthy.

Forcing Sri Lanka government and Tamils to sign an agreement will give credit to Trump for solving this long standing ethnic and political crisis, and perhaps Trump could be honored with a Nobel Peace Prize.