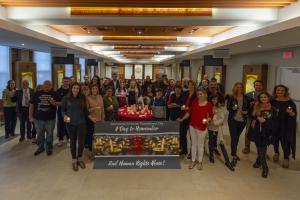 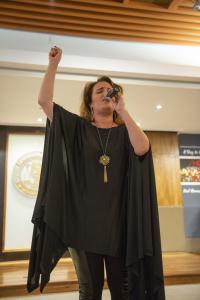 International Israeli singer Ms. Judy Bechar opened the event with a performance of a special song in memory of the victims of the Holocaust.

CCHR hosted the event to raise social consciousness of the Holocaust and other human rights violations in order to ensure future generations never forget.

By labeling people as lesser than, unfit or mentally ill, psychiatrists created an environment in the United States and in Germany which led to one of the darkest moments in human history.”
— Diane Stein, President CCHR Florida

Designated as International Holocaust Remembrance Day by the United Nations General Assembly, January 27th marks the anniversary of the liberation of Auschwitz-Birkenau when over 7,000 prisoners were freed and the slave camp which had detained over 1.3 million prisoners, was finally shut down.

International Israeli singer Ms. Judy Bechar opened the event with a performance of a special song in memory of the victims of this horrific period in history before recounting a story from her childhood, telling of how a concentration camp survivor had shared her personal story of loss and tragedy with her. It was at that moment that Ms. Bechar pledged to be the voice for those suffering human rights abuse.

“When I heard all that this woman had lost, her parents, her siblings, everything, I couldn’t breathe,” said Bechar. “But then I realized she had won by surviving and it was then that I knew that I had to be the voice for those people who suffer human rights abuses.”

CCHR hosted the event for the purpose of raising social consciousness by educating people on the inhumanity of the Holocaust and other human rights violations in order to ensure future generations never forget.

While most people are aware of the murder of millions of Jews during World War II, many have no idea that before the Nazi regime even came to power German psychiatrists proposed the extermination of mental health patients and developed processes and systems to murder patients by the thousands with euthanasia as well as eugenically sterilizing patients. Organized psychiatry implemented 6 psychiatric facilities that aimed and succeeded in the killing of 100,000 German mental patients. These psychiatric facilities provided the training, personnel, and technologies to create the mass extermination camps for the Holocaust. [1]

“By labeling people as less than, unfit or mentally ill, psychiatrists created an environment in the United States and in Germany which led to one of the darkest moments in human history,” said the president of the Florida chapter of CCHR, Diane Stein. “Today we must be ever watchful that this is never allowed to happen again.” [2]

While some may think that the days of picking up people off the street, from their homes or from their schools is long past, the United States allows for involuntary psychiatric examination in every state. In Florida there were almost 200,000 such examinations, known as a Baker Act, in 2017. Psychiatrists and other mental health professionals have been given the power to use law enforcement to have any man, woman or child, no matter their age, taken into custody and transported to a mental health facility against their will if they believe the person is mentally ill. This power is granted despite the fact that there is no scientific test for mental illness and mental illness labels and disorders are simply voted into existence and placed in the Diagnostic and Statistical Manual of Mental Disorders. These disorders are nothing more than the opinion of the very same people who profit off of mental health labels. [3] [4] For more information on the Baker Act please call (727) 442-8820 or visit www.cchrflorida.org.

About CCHR: Initially established by the Church of Scientology and renowned psychiatrist Dr. Thomas Szasz in 1969, CCHR’s mission is to eradicate abuses committed under the guise of mental health and enact patient and consumer protections. L. Ron Hubbard, founder of Scientology, first brought psychiatric imprisonment to wide public notice: “Thousands and thousands are seized without process of law, every week, over the ‘free world’ tortured, castrated, killed. All in the name of ‘mental health,’” he wrote in March 1969. For more information visit www.cchrflorida.org.