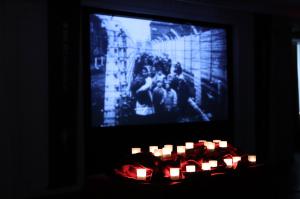 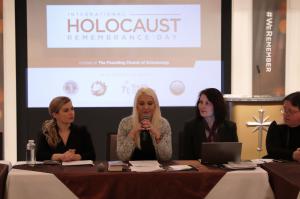 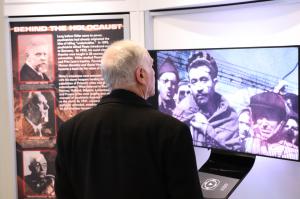 We must make sure that new generations are educated so that they can apply the lessons of the Holocaust to today's world and prevent future genocides.””
— Isabelle Vladoiu, CCHR DC Director

WASHINGTON, DC, USA, January 30, 2019 /EINPresswire.com/ — In honor of Holocaust Remembrance Day, human rights advocates and organizations gathered in the nation’s capital, Washington, DC, for a memorial service commemorating the victims of the Holocaust and a panel discussion. The event was aligned with the global campaign #WeRemember launched by the World Jewish Congress, and joined by many world leaders and institutions among them Pope Francis, Canadian Prime Minister Justin Trudeau, UK Prime Minister Theresa May, the European Commission, UNESCO, and others. January 27th was proclaimed by the United Nations in 2005 as International Holocaust Remembrance Day.

In remembrance of the 6 million Jews, including 1.5 million children, murdered in the Holocaust, a special candle lighting ceremony took place, accompanied by a heartfelt performance of the song “Shema Israel”, originally interpreted by Sarit Hadad, acclaimed Israeli singer. The theme of the panel discussions was “End Genocides. Demand and Defend Your Human Rights,” and concerned citizens engaged in dialogue on the Holocaust, Rwandan and Armenian genocides — what happened, why they happened, and how they still matter. The international organizations in attendance were Citizens Commission of Human Rights, Youth for Human Rights International, the International Union of Bilateral Chambers of Commerce and Industry and United for Human Rights with the mission to raise awareness on the heinous acts that happened during the Holocaust and help put an end to racism, xenophobia, and anti-Semitic views in modern day society.

Keynote speaker and moderator of the panel, Isabelle Vladoiu, the director of Citizens Commission of Human Rights Washington, DC, delivered an introduction to the Holocaust, exposing the systematic and state-sponsored persecution and murder of millions of Jews by the Nazi regime, the cruelty with which these horrific acts were done, unveiling also the aftermath of the Holocaust, where hundreds of thousands of “liberated, but not free” Jews had to live in the same camps where they suffered.

At the end of last year a concerning report by the European Union Agency for Fundamental Rights (FRA) revealed that nine out of 10 European Jews said that anti-Semitism increased during the past five years, and a shocking recent CNN poll exposed that one in 20 Europeans surveyed had never heard about the Holocaust.

“Today for International Holocaust Remembrance Day we stand united, and humbly commemorate millions of Jews who were murdered in the Holocaust,” said Ms. Vladoiu. “But, today we must think beyond remembrance. We must make sure that new generations are educated so that they can apply the lessons of the Holocaust to today's world and prevent future genocides.”

Erica Rodgers, the National Director of Youth for Human Rights International, spoke about the Armenian Genocide and the atrocities committed on the eve of World War I, bringing to the attention of the participants the fact that this genocide might have been the one Hitler draw his inspiration from. Ms. Rodgers stated, “In order to prevent future genocides or acts of horrible discrimination we must ensure mankind is well educated on what human rights are. It is the job of each citizen to take a stand against discrimination and to protect the rights of all people.”

The reason why talking about the Holocaust today matters is because genocides and crimes against humanity still happen today. Speaking on the Rwandan genocide was the Executive Director of the Church of Scientology National Affairs Office, Ms. Beth Akiyama. She shared the story of Immaculee Ilibagiza, a survivor of the Rwandan Holocaust and author of the book “Left to Tell,” whom she had the honor of meeting a few years back at the United Nations.

Ms. Akiyama also commented that Scientology founder L. Ron Hubbard wrote about human rights inequities that exist in every country, who once said, “The UN came up with the answer. An absence of human right stained the hands of governments and threatened their rules. Very few governments have implemented any part of the Universal Declaration of Human Rights. These governments have not grasped that their very survival depends utterly upon adopting such reforms and thus giving their peoples a cause, a civilization worth supporting, worth their patriotism.”

Simultaneously, an interactive all-day self-guided exhibit put up by Citizens Commission on Human Rights, showcasing short videos and information on the hidden men behind the Holocaust and other human rights abuses, was held at the Founding Church of Scientology Washington, DC. The exhibit revealed the role that psychiatrists played in the Holocaust, providing the ideological structure for the euthanasia program, as confessed publicly 60 years after the Nuremberg Trials by Dr. Frank Schneider, President of the German Association of Psychiatrists. Panel participants had the opportunity to go through the immersive displays and watch the short documentaries, as well as to get the “Psychiatry: An Industry of Death” educational materials.

For more information about materials or participation in the Citizens Commission on Human Rights Washington DC, call (202)-349-9267 or email isabelle.vladoiu@cchrdc.org