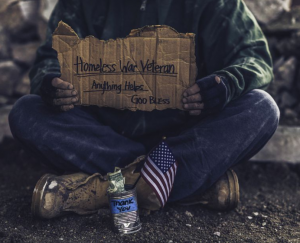 "Shockingly, around 70,000 veterans are believed to be homeless or without a permanent place to call their own," explains Pietro, further pointing out that veterans currently represent around 10 percent of all homeless individuals in the United States.

Perhaps more shocking still, as many as twenty times that number are considered 'at risk' of homelessness. "Approximately 1.4 million veterans are at risk of finding themselves homeless according to the National Coalition for Homeless Veterans," reveals the Justice Government Supply, Inc. boss.

Pietro believes that a lack of affordable housing, inadequate available support networks, substance and alcohol abuse, plus often serious mental health concerns are all to blame for high rates of homelessness among veterans. "The rate of homelessness among veterans has increased significantly in recent years," he explains, "particularly in places such as Palm Beach where the number of homeless veterans has increased by an estimated 65-70 percent."

Pietro is, therefore, determined to continue his fight to support local veterans in Palm Beach and throughout Florida, as well as elsewhere in the United States, in securing much-needed safe, comfortable, and affordable housing.

"By driving employment opportunities and facilitating valuable, skilled work for veterans via strategic partnerships with local businesses, we're able to afford these incredible men and women with the opportunities which they need to live the lives they deserve to enjoy," he explains.

Pietro continues, "This, coupled with the correct and necessary support for those struggling with depression, anxiety, post-traumatic stress disorder, and other mental health concerns, as well as addiction to drugs and alcohol, is vital in the continued fight against veteran homelessness."

Facilitating counseling sessions and supporting veterans through times of difficulty are just two of the many ways in which local communities across the nation can help to assist veterans, according to Steven R. Pietro.

"I'm proud to be taking a hands-on approach," he adds, wrapping up, "and, for me, to see a smile on a veteran's face is all the reward I need."