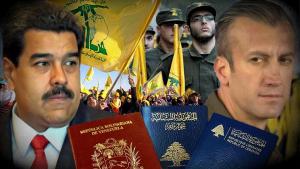 WASHINGTON, DC, USA, February 28, 2019 /EINPresswire.com/ — The World Council of Cedars Revolution (WCCR), representing the Lebanese diaspora world-wide, is very concerned about the role of Hezbollah-linked elements within the Venezuelan regime of Nicolás Maduro, particularly because of their alleged role in the oppression of civilians. We call on the Trump administration and the US Congress to investigate the role played by these pro-Iran officials in the Maduro regime of Lebanese origin.

These include the Prosecutor General of Venezuela, Tarek William Saab, who is under US sanction due to his links to international terror and subversion (Hezbollah), the Minister of Education, Das Jaua, who has been sanctioned by the EU, Canada, Panama, Switzerland and the United States for a variety of offenses including money-laundering, financing terrorism and financing the proliferation of weapons of mass destruction. The current Minister of Industries and National Production, Tareck El Aissami, while serving as Vice President under Maduro (January 2017 – June 2018), was accused by the US of corruption, money laundering, and drug trafficking involving Hezbollah. Canada, the EU, Switzerland and the United States have all imposed sanctions on him as well. According to the former Venezuelan intelligence chief, Hugo Carvajal, El-Aissami was instrumental in inviting Hezbollah into Venezuela in 2009.

“We need to make sure that these corrupt, Hezbollah-linked officials are swept from power along with Maduro,” said Tom Harb, President of WCCR. “Because their positions of power are at risk, they are likely to take draconian action against their political opponents among the civilian population.

“We hope the US government and the OAS will conduct a swift investigation of these allegedly pro-Hezbollah officials to determine if they are causing any harm to civilians across Venezuela,” he said.

Just as the new Brazilian President Jair Bolsonaro is taking action against Hezbollah operatives in his country, it is hoped the same can happen in Venezuela with the rise of Juan Guaido and the restoration of democracy. Terror networks must be eradicated in this hemisphere.

WCCR is in coordination with The American Mideast Coalition for Democracy (AMCD) to expand awareness of Middle Eastern influence in Venezuela to identify more names collaborating with the Maduro regime.