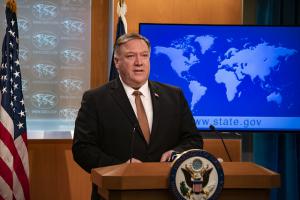 U.S. Secretary of State Michael R. Pompeo delivers remarks to the media in the press briefing room at the U.S. Department of State in Washington, D.C., on April 8, 2019. [State Department photo by Ron Przysucha/ Public Domain]

WASHINGTON, DC, USA, April 9, 2019 /EINPresswire.com/ — The American Mideast Coalition for Democracy applauds US Secretary of State Mike Pompeo for taking the courageous step of designating Iran's Islamic Revolutionary Guard Corps (IRGC) as a terrorist organization – a move AMCD had lobbied for over the past two years.

"It is well known the IRGC arms and funds other terrorist organizations, such as Hamas and Hezbollah," said AMCD Co-Chair, Tom Harb. "They are also involved in assassinations, cyber-attacks, drug running, helping terrorists develop missile technology as well as providing missiles directly to Hezbollah. There is no doubt the IRGC is deeply involved in terrorism."

"They're also directly implicated in killing US soldiers inside Iraq," added AMCD President John Hajjar. "The IRGC supplied thousands of IEDs used to kill and maim Americans for years. It's about time we took action against them."

"The IRGC is intimately involved in the internal oppression of the Iranian people," said AMCD Vice-Chair and Iranian-American, Hossein Khorram. "Over 7,000 people were arrested last year. At least 26 protestors were killed outright and another nine have died in custody. The IRGC monitors and threatens the population to keep the mullahs in power.

"President Trump's designation is correct because unlike all other nations' armed forces, the IRGC was not created to defend the sovereignty of the Iranian nation, but to force the failed Islamic ideology onto the Iranian nation and the surrounding countries," continued Khorram."The fact that the IRGC is being targeted in Syria by Israeli armed forces is yet another testimony to the fact that the IRGC can only operate with terror against civilian populations. Merriam Webster Dictionary defines 'terrorist' as 'a person who uses unlawful violence and intimidation, especially against civilians, in the pursuit of political aims.' and this definition is a 100% match for the IRGC and what it has done since its inception in 1979. Thanks to President Trump for having the courage and vision to add this long overdue designation to IRGC."

"The internal Islamic police, the Basij, is also an arm of the IRGC," stated AMCD Secretary, Rebecca Bynum. "It is they who round up women for the 'crime' of taking off the hijab. These women are tortured and raped on the orders of the IRGC. Anything we can do to mitigate this horror is welcome news."