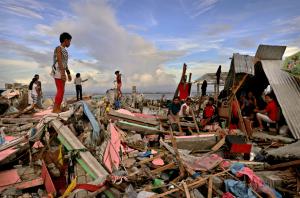 Rahim Hassanally reflects on his support for aid efforts following the devastation caused by Typhoon Haiyan.

FAIRFIELD, CALIFORNIA, USA, April 10, 2019 /EINPresswire.com/ — Automotive industry professional Rahim Hassanally, a keen philanthropist based between Texas and California, looks back on his fundraising activities following deadly Typhoon Haiyan which hit the Philippines in 2013 as he shares more about the efforts of himself and his colleagues to raise much-needed funds for relief agencies in the aftermath of the disaster.

"After seeing the devastation caused in the Philippines by deadly Typhoon Haiyan in 2013, I remember thinking to myself, 'We need to take action,'" reveals Hassanally.

Accordingly, he and fellow automotive industry colleagues rallied support for relief efforts following the devastating storm which hit the Philippines on November 3, 2013, where it was known as Super Typhoon Yolanda. "I was first made aware of the typhoon by a Filipino colleague," explains Hassanally, "who said to me, 'Let's help the Philippines and support the community.'"

As Hassanally recalls, he required no convincing. In the days which followed, he and others around him sought to raise thousands of dollars to assist in the typhoon aid effort. "In a little over two weeks we'd raised $5,800," he explains, "all of which was promptly donated to relief agencies."

At the time based in California's Solano County, Hassanally credits strong ties to the local Filipino community for the impressive fundraising total, which later exceeded $6,000. "People of Filipino descent at the time accounted for around 10 percent of Solano County's population of 420,000 residents," he explains, "so the typhoon profoundly touched a large number of people locally."

In the years which have followed, Hassanally has further gone on to support and fundraise for a number of other charities and nonprofit organizations. "I'm proud to have a philanthropic nature," reveals the automotive industry professional, who's also a keen advocate for breast cancer awareness and other good causes. These include his local air force base and homeless shelters such as the Solano Mission, a local shelter which serves the homeless and hungry in and around Solano County.

Indeed, several years ago Hassanally sought to secure support from friends, colleagues, and others in the area to donate a significant sum of money to the Solano Mission after thieves stole hundreds of turkeys from the shelter just days prior to Thanksgiving.

"It's important that we're all invested in our local communities," Hassanally adds, wrapping up, "but it's vital, too, that we continue to support critical aid efforts both nationally and internationally, especially in light of devastating natural disasters such as Typhoon Haiyan."

Born and raised in Texas, Rahim Hassanally is an experienced automotive industry professional today based between Texas and California. The recipient of a number of prestigious industry awards earned during more than two decades in the business, Hassanally has also made the Automotive News 'Top 40 Under 40' list. A member of the National Association of Minority Automobile Dealers for more than 10 years and an American International Automobile Dealers Association board member, in his spare time Hassanally is a keen sportsman and enjoys a number of other hobbies and pastimes.