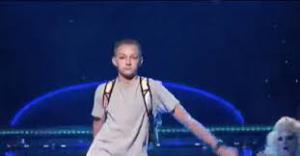 LAWRENCEVILLE, GEORGIA, USA, April 11, 2019 /EINPresswire.com/ — Backpack Kid Russell Horning is a regular supporter of charities near and far, and he encourages his millions of followers to get involved in their local communities wherever they can. Apart from visiting schools, handing out donations, raising awareness and funds at charity auctions and more, he assists the DeKalb County Animal Shelter provide happier lives to the animals in the area.

At just 17 years old, Backpack Kid (or Russell Horning to his friends and family) has performed alongside Katy Perry on the SNL stage, dropped his first solo album, created an iconic dance, and gathered over two million online followers. He’s known around the world for his whacky choreography, and he’s making a big name for himself as a regular supporter of various charities and outreach programs.

Backpack Kid has visited elementary schools with backpacks full of school supplies for the students. He’s contributed to Backpacks for Africa, which aims to deliver individual backpacks and supplies to underprivileged educational centers in the villages of Africa.

Though he’s gained wide acclaim and his fair share of fame, Backpack Kid is careful to uplift his local community, too. He frequently partners with the Aurora Theatre of Gwinnett County, giving back to the stage that gave him his first start in entertainment. He also works with Gwinnett County schools and other local programs to improve his community.

In addition, he’s worked with the DeKalb County Animal Shelter and has recently adopted and rehabbed one of their dogs. Backpack Kid has been walking her and training her to introduce normalcy into her life and improve her spirit. Once a terrified and often nasty animal, Backpack Kid has revived her and given her a new happy life––which is the ultimate goal for every animal at the DeKalb County shelter.

The Enforcement Division is a partnership between the DeKalb County police department and the shelter. The Enforcement Division upholds local and state laws regarding animals, which includes handling complaints about animals, rabies control, containing vicious and dangerous animals, and opposing the cruelty or neglect of animals. In addition, the DeKalb Animal Shelter offers pet registration, field services, lost pet services and more.

“Animals need our help just like community members do,” says Backpack Kid Russell Horning. “If people don’t know where to give back, animal shelters are a great place to start, and almost every city has one.”