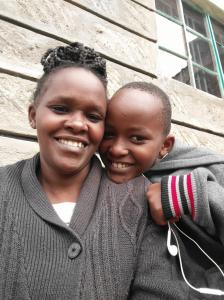 Women for a Better World is an organization focused on easing the suffering of women in third-world countries through the donation of unused cell phone minutes.

Women for a Better World has given me hope, which I didn’t have before.Now I have a chance to get ahead and create a better life for my family.”
— Martha Ngatia

ATLANTA, GEORGIA, UNITED STATES, April 12, 2019 /EINPresswire.com/ — Women for a Better World (WBW), an organization focused on easing the suffering of women in third-world countries through the donation of unused cell phone minutes, has announced the acceptance of its first donation within its Give a Minute Program.

WBW was established by Tom Meredith, the founder of BitMinutes, as a way to embrace the company’s charitable mission.

One of the challenges for WBW has been explaining to potential donors in developed countries, like the United States, that unused cell phone minutes have a different meaning than what they might have, for example, in Kenya.

Martha Ngatia can attest to this.

“Being able to have enough unused cell phone minutes is critical for me and my family,” said Martha who lives in a homeless shelter in Kenya with her three teenage sons. “One of the benefits of sharing unused cell phone minutes is that we can have plenty of time to speak with friends and family without restriction. But the more powerful value of these minutes is because they are frequently used as a currency in my country. So such donations can help me put food on the table and maybe even get my own place for my family and I to live.”

Denise Dales, a director for WBW and Vice President of Global Sales for BitMinutes, has spoken personally with countless women like Martha.

“They are so inspiring,” she said. “These are proud women, who have dreams. And the difference a few dollars can make is life-changing.”

The program also serves to introduce women to the value of BitMinutes as a business-creation tool. In Nigeria, for example, the company has created a Trusted Area Network of existing shop merchants, who have the ability to make small-business loans, using BitMinutes as collateral.

Starting her own business is something Martha has been thinking about, of late.

“Women for a Better World has given me hope, which I didn’t have before,” she said. “Now I have a chance to get ahead and create a better life for my family.”

Donations can be made at WBW.

About BitMinutes Technology
BitMinutes technology harnesses the decentralized power of the blockchain by leveraging the digital ledger behind user data for making purchases, transferring money, generating loans and using airtime minutes. Selling and lending BitMinutes-based micro-loans will create a business opportunity for entrepreneurs globally. BitMinutes will turn the corner retailer into the corner banker, delivering banking services to the smallest of villages and towns worldwide. And doing it profitably.

About BitMinutes, the Company
BitMinutes is an early stage fintech company, founded in the U.S., with a European subsidiary based in Liechtenstein. Its token, the BitMinute, is exchangeable into universal prepaid airtime minutes. Prepaid minutes are already traded informally globally by billions of mobile phone owners.
BitMinutes’ tokens also allow peer-to-peer value transfer to over 1.2 billion bank accounts in 70 countries and prepaid top-up to over 4 billion mobile accounts in over 200 countries. More importantly, BitMinutes facilitate the expansion of micro-credit lending in communities where lending is rare and too expensive for most individual borrowers. BitMinutes’ ownership and transactional records will establish a new type of consumer credit score for emerging market consumers who currently struggle with limited access to capital and a lack of traditional banking services.