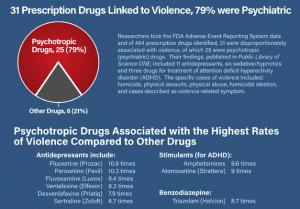 Officials need to investigate the mounting evidence that psychiatric treatment and its failure has had something to do with a large percentage of the acts of violence occurring in our communities.”
— Diane Stein, President CCHR Florida

CLEARWATER, FL, UNITED STATES, May 8, 2019 /EINPresswire.com/ — The Citizens Commission on Human Rights (CCHR), a mental health watchdog dedicated to the protection of children, unveiled a new exhibit in Tallahassee designed to educate lawmakers on the dangerous side effects of psychiatric drugs and the possible connection between these risks and the rising suicide rates and violence in Florida.

Citing the fact that antidepressants and antipsychotics have both been linked to violent effects in a percentage of those taking them, CCHR is urging officials to consider that the side effects of the drugs being prescribed to children in crisis may very well be behind the violence they are hoping to prevent. [1]

At least 27 international drug regulatory agency warnings have been issued on psychiatric drugs being linked to mania, psychosis violence, homicidal ideation, aggression and hostility. Admitting that only 1-10 percent of drug side effects are reported to its MedWatch program, the FDA’s Adverse Event Reporting System has at least 1,530 cases of homicide/homicidal ideation reported to it as linked to psychiatric drugs. Yet despite these facts, screenings and the usual resultant psychiatric drug prescription is still being pushed as the solution.

In a comprehensive report released last year, CCHR documented 36 school shootings and school-related acts of violence that date back to 1988 with all of the crimes committed by people either taking or withdrawing from psychiatric drugs. These acts of violence resulted in 172 people wounded and 80 killed.

Harvard Medical school psychiatrist Joseph Glenmullen is quoted in the report stating: “The irritability and impulsivity” from antidepressants, for example, “can make people suicidal or homicidal.” Also cited is Patrick D. Hahn, an affiliate professor of Biology at Loyola University in Maryland who confirms: “The link between antidepressants and violence, including suicide and homicide, is well established.” [2][3]

An international expert in psychopharmacology, also quoted in the report, Dr. David Healy, estimates that 90 percent of school shootings, over more than a decade leading up to 2012, were linked to SSRI antidepressants (e.g., fluoxetine, paroxetine, sertraline, etc.).[2] Dr. Healy warns that: "Violence and other potentially criminal behavior caused by prescription drugs are medicine's best-kept secret."[4]

In the aftermath of recent school shootings, training in Mental Health First Aide and increased mental health screening of students has been a widely promoted response yet these actions simply lead to a significant number of individuals being labeled and drugged with the very same psychotropics linked to violence in the first place.

CCHR warns that the current course of action, increased mental health, will not only escalate state budgets for no equitable or positive return but more importantly, will put more students, teachers and the community at risk of increased violence.

Illustrating this is the fact that despite the establishment of the Statewide Office for Suicide Prevention and the Suicide Prevention Coordinating Council and their focus on suicide prevention initiatives in 2007, the number of suicides for children, teens and young adults has continued to skyrocket.

“We brought this multi-media exhibit to the state capital to raise awareness on the absolute failure of the mental health industry to save the lives of children in crisis,” said Diane Stein the president of the Florida Chapter of CCHR. “Our lawmakers need to take effective action to protect Florida’s children.”

Individuals concerned with the link between violence and psychiatric drugs are encouraged to send a copy of the report, Psychiatric Drugs Create Violence & Suicide: Putting the Community at Risk to their legislative representative calling for an investigation. https://www.cchrint.org/pdfs/violence-report.pdf

About CCHR: Initially established by the Church of Scientology and renowned psychiatrist Dr. Thomas Szasz in 1969, CCHR’s mission is to eradicate abuses committed under the guise of mental health and enact patient and consumer protections. L. Ron Hubbard, founder of Scientology, first brought psychiatric imprisonment to wide public notice: “Thousands and thousands are seized without process of law, every week, over the ‘free world’ tortured, castrated, killed. All in the name of ‘mental health,’” he wrote in March 1969. For more information visit, www.cchrflorida.org