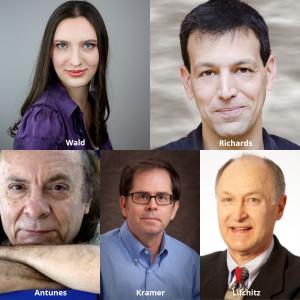 The North/South Consonance Ensemble under the direction of Max Lifchitz perform works by composers from Brazil, Mexico and from throughout the US.

NEW YORK CITY, NY, USA, May 22, 2019 /EINPresswire.com/ — North/South Consonance, Inc. continues its 39th season on Tuesday evening June 4 when the North/South Consonance Ensemble under the direction of Max Lifchitz introduces music by composers hailing from Brazil, Mexico and throughout the US.

To be heard for the first time in New York City are works for pierrot ensemble by Brazil's Jorge Antunes and Americans Timothy Kramer, Paul Richards and Sarah Wald. Rounding off the program a work by Max Lifchitz, the Mexican-American composer and conductor.

The event will start at 8 PM and end approximately at 9:30 PM. It will be held at the air-conditioned auditorium of Christ and St. Stephen's Church (120 West 69th Street — between Broadway and Columbus) in Manhattan. The auditorium is ADA accessible. No tickets or reservations needed.

ABOUT THE COMPOSERS AND THEIR MUSIC

Jorge Antunes' Columbine Lunaire is an intensely vivid and colorful work written as hommage to the 20th century master Arnold Schoenberg's whose masterpiece Pierrot Lunaire is one of the seminal contemporary compositions. A native of Rio de Janeiro, Antunes taught at the Villa-Lobos Institute and earned a doctorate in aesthetics at the Sorbonne. His works have been performed throughout Europe and Latin America and are published by Sistrum.

Timothy Kramer's Open Borders — commissioned by the Mexican ensemble Onix — represents the composer's reaction to the various political solutions proposed to deal with the US-Mexico border. Kramer describes the work as "a rich tapestry of music unfolds: an odd, exotic tune; a jagged blues progression; a Latin groove; a small minimalist whirlpool." Kramer studied at the University of Michigan and has taught at Trinity University in San Antonio and Illinois College. The press has described his style as "constantly inventive, clear, full of energy and admirably precise."

Max Lifchitz's Yellow Ribbons No. 35 is a haunting, single-movement work inspired by the 1979 American hostage crisis in Iran. The work alludes to the continuing war on terrorism and its consequences in a subtle manner. Born in Mexico City, Lifchitz has resided in New York City since 1966. His works have been performed throughout Europe, Latin America and the US. He is well known for his effort to promote the works of composers underserved by mainstream performing organizations.

Paul Richards' Ouroboros takes its name from the depictions of a serpent or dragon eating its own tail, typically symbolizing eternity or cyclicality found in many cultures. The musical materials employed in this work are cyclic in nature suggesting infinity within a finite space. Richards' works have been heard throughout the US and abroad and are published by Carl Fischer Music, Inc. the winners of the ASCAP Rudolph Nissim Prize he heads the composition program at the University of Florida.

Sarah Wald's Bacchanale was mainly inspired by opera: namely, by Bizet's Carmen, by several of Verdi's operas, and, perhaps unsurprisingly, by the Bacchanale from Saint-Saens' Samson et
Dalila. The piece begins at a moderate tempo, which gradually increases to a chaotic frenzy by its end. originally from Chicago, Wald studied at Columbia university and the San Francisco Conservatory. Her works have been featured at various festivals in the U.S. and Europe, and broadcast on WFMT's Relevant Tones program.

Since its inception in 1980, the North/South Consonance, Inc. has brought to the attention of the New York City public over 1,000 works by composers hailing from the Americas and elsewhere representing a wide spectrum of aesthetic views. Its activities are made possible in part, with public funds from the New York State Council on the Arts and the New York City Department of Cultural Affairs. Additional support provided by the Women's Philharmonic Advocacy, the Music Performance Trust Fund as well as the generosity of numerous individual donors.