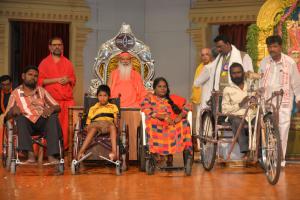 Tricycles and support vehicles donated to the communities of weaker sections 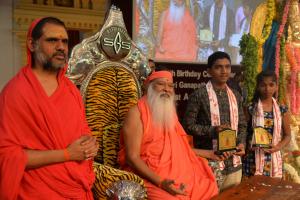 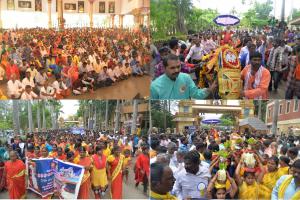 All are equal in the creation. We need to make the best use of this human life by supporting, helping each other.”
— Sri Swamiji

MYSURU, KARNATAKA, INDIA, June 3, 2019 /EINPresswire.com/ — Thousands of civic workers and scavenging community members, helping the cities of Karnataka clean, have come together to celebrate the 77th Birthday of Parama Pujya Sri Sri Sri Ganapathy Sachchidananda Swamiji, the founding pontiff of Avadhoota Datta Peetham, Mysuru. In Mysuru, Karnataka several district civic workers' associations celebrated the Seer's birthday as their own with much pomp and joy.
The members have paid utmost respect to Sri Swamiji by carrying Him in a procession to the place of celebration.
Later, speaking at the event, the leaders of the communities have extolled and thanked the effort of Sri Swamiji in getting the communities into the stream of social life. The love, affection and respect Sri Swamiji had given the members of the communities is very much appreciated. They say that it had given them self respect, equal standing and opportunity in the society.
As a mark of the equanimity practiced by Him, Sri Swamiji has conducted more than 580 community weddings so far and with yet another event planned, sponsored and scheduled for later this week.
Sri Swamiji, over several years, has gifted more than 20 temples to these weaker section colonies with two more scheduled to be dedicated to the colonies in the coming week.

From a time where they were banished from entering the temples, to a time where they are able to run their own colonies, worship places, gatherings is a long way that needed tremendous social support, strength, acceptance, love and affection – that all the members received unconditionally from Sri Sri Sri Ganapathy Sachchidananda Swamiji.

Sri Swamiji found this occasion to make it further strengthening and supporting to the communities, by giving away scholarships and educational support to over 200 meritorious students. He further donated tricycles for the support of differently-abled and distributed musical instruments for the colonies and offered several other support activities.

Blessing the gathering with his benedictory address, Sri Swamiji, called for an inclusive society that helps the fraternities, thereby building a stronger nation. The Seer advised the community members and leaders to come forward to the Ashrama and participate in all its activities.

The event, first and unique of its kind in India, is an important milestone in strengthening the harmony of the social fabric, where the Pontiff of Avadhoota Datta Peetham, Mysuru is paid respects from the bottom of the hearts of the weaker section members of the society in reciprocation of the unconditional love and support the members received from the Seer over the years.