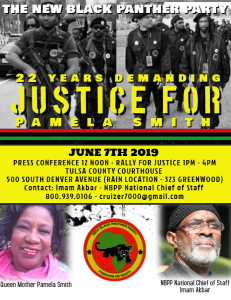 NBPP RALLY FOR JUSTICE IN TULSA

Press Conference and Rally for Justice

I am no longer begging for Justice. I am demanding Justice.”
— Pamela Smith

TULSA, OKLAHOMA, USA, June 3, 2019 /EINPresswire.com/ — The New Black Panther Party will stand in solidarity with Queen Mother Pamela Smith in her fight for justice. Pamela Smith and National members of the NBPP will hold a press conference Friday – June 7 at 12:00Noon at the Tulsa County Courthouse – 500 South Denver Avenue. In the event of rain, the press conference will be held at 323 Greenwood. Community supporters and organizations have planned a Rally for Justice from 1:00pm – 4:00pm at the same location.

Pamela Smith is a victim of rape. Her journey for justice began in 1997 at the Tulsa Community Correctional Center while working at the north Tulsa Public Safety Department Driver Testing Office. Affirmed that she was repeatedly raped and tortured with a glass salt shaker by her supervisor Donald Reed Cochran, an initial police report was filed, but charges were never filed.

Where is the salt shaker…the one with the DNA on it? Pamela Smith’s twenty-two-year battle for justice against State of Oklahoma officials are clear signs of a massive cover-up and her legal case displays blatant malfeasance. There is a chain of evidence leading up to a massive cover-up, corruption and hypocrisy in this case — including statewide connections from the local district attorney and local FBI. The District Attorney (Drew Edmonston) has a record of ninety executions — 70 percent of them are Black. District Attorney (Tim Harris) received the glass salt shaker. SMITH vs COCHRAN http://www.aele.org/law/2003JBJAN/svc.html

“We stand with Pam Smith, we stand with all of the victims who haven’t received justice in this system.” – State Representative Regina Goodwin –END–
https://okcfox.com/news/local/woman-still-fighting-for-justice-in-rape-case-22-years-later