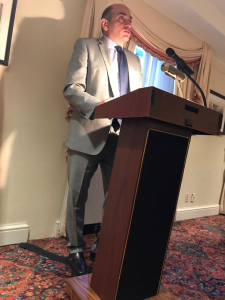 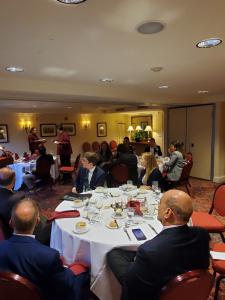 WASHINGTON, DC, USA, June 4, 2019 /EINPresswire.com/ — The American Mideast Coalition for Democracy in association with the World Council of the Cedars Revolution hosted a dinner in honor of John Hajjar on May 29th and formally endorsed his candidacy to become the next United States’ ambassador to Lebanon.

Mr. Hajjar believes that Lebanon has a window of opportunity under President Trump which it must seize in order to break the power of Iran’s terrorist proxy, Hezbollah, which has defied UN Security Council Resolution 1559 demanding its disarmament and the cessation of all foreign meddling in Lebanese affairs.

Said Mr. Hajjar: “Lebanon, a country sheltering 1.5 million Syrian refugees, is suffering through a disastrous economy and from a corrupt political class—not to mention experiencing foreign hegemony and domination by the biggest state sponsor of terror, the IRI and its local enforcers, Hezbollah.

“Despite all of these difficult challenges, there is a path for the Lebanese to extricate themselves and their country from these problems, restore liberty, and elect a capable and representative government that respects the rule of law, protects human rights, and restores prosperity to the Lebanese people. The road has been paved by the Trump administration who has jettisoned the JCPOA—AKA the “Iran Deal”—a catastrophic deal from the start. Trump has also ratcheted up the most biting sanctions Hezbollah has ever seen. Reports are widespread that austerity measures have been taken to preserve the basic levels of pay, welfare and patronage that Hezbollah is known for while their patrons in Iran also suffer tough sanctions as well as low oil prices thanks to the fracking revolution that has turned the US into the world’s largest energy producer—thanks again to the Trump administration’s pro-domestic energy policies.

“These external factors open a window of opportunity for the restoration of Lebanon to a sovereign nation. What’s needed now is for the Lebanese people to act in reciprocity to the opportunity that has been given them by this administration. The Lebanese have another advantage—extremely talented human capital and a vast, well-established diaspora that has—and will—support the motherland when the cause is right. Now is that time.

“Since the early 2000s, the World Council of the Cedars Revolution has advocated and lobbied for a restoration of Lebanese sovereignty and has achieved a fair amount of success through the bipartisan passage of the Syria Accountability Act and UNSCR 1559. I am proud to have played a role in both these lobbying efforts through countless meetings with many leaders and trips to New York City, Washington, D.C., and Brussels. Thereafter, the Lebanese people answered the call and took to the streets in 2005, and the civil demonstrations known as the Cedars Revolution resulted in the peaceful withdrawal of Syrian troops and euphoric celebrations from all sectors of Lebanese society—well, almost all—there were no celebrations from Hezbollah nor from the corrupted political class that had too much to lose from upending the status quo. Hezbollah countered the freedom marchers, sought to seize control of Beirut, and even employed targeted assassinations of key leaders. In the 15 years since the remarkable peaceful revolution, Hezbollah has tightened its grip on Lebanon and controls its destiny. It is no wonder the economy has stagnated and the public debt has ballooned to 160% of GDP, among the worst in the world. To put it bluntly, who would invest in a country controlled by the largest state sponsor of terror, Iran, which enforces its writ through its proxy, Hezbollah?

“I cannot lay all the blame on the Lebanese and their leaders. In 2009, when President Obama took office, he advocated for an opening to the IRI capped by the JCPOA in 2015. He also opened his administration to Islamists here in the US and ignored the drastic rise in acts of terror worldwide. They were chanting “Death to the USA” in the streets of Tehran prior to Obama, during his presidency—and before and after the JCPOA. That is why I supported then-candidate Trump, when early in in his candidacy he called for the withdrawal from the Iran Deal. With my colleague, Tom Harb, I served as co-chair of the American Mideast Coalition for Trump. We assembled a diverse array of Middle East Americans from every religion and ethnicity who saw in Donald Trump a disrupter that would refuse to accept the status quo and who would not sell out the people of the Middle East to dictatorial thugs and Islamists.

“Nevertheless, time is of the essence. All of President Trump’s transformational policies will be reversed by any of his Democrat opponents—maybe even by a future Republican President. We in the AMCD are ready to serve our beloved country on the inside if asked and, of course, we will continue to serve from the outside in our roles as civil society advocates. In Lebanon, the Lebanese need new, fresh leaders and a clean break from the past (and corrupted) family clans. The Venezuelan model of electing President Juan Guaido serves as a perfect and timely example. The framework is already in place: a full enactment of UNSCR 1559 which will result in the disarmament of Hezbollah and free and fair elections. If necessary, a government in exile should be seated and the Lebanese should take to the streets to demand their freedom. The Diaspora will respond in kind. Here in the United States, both Republican and Democrat leaders of Lebanese ancestry will demand a stronger policy on Lebanon that restores its full sovereignty. Secretary Pompeo and NSA Bolton have been instrumental in upping the ante on Iran and, no doubt, will continue to insist that it change its ways. Thanks to both for their unwavering support!