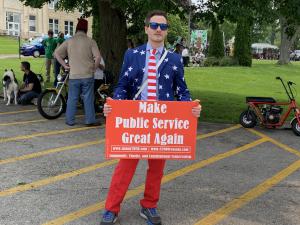 Danny Malouf, Republican 14th Cong. Dist. Ill. pledges to donate half his Congressional salary back to non-profit organizations in his district.

I am no bird; and no net ensnares me; I am a free
human being with an independent will.”
— Charlotte Bronte, Jane Eyre

CRYSTAL LAKE, ILLINOIS, UNITED STATES OF AMERICA, June 4, 2019 /EINPresswire.com/ — “I am announcing today my 87,000.com initiative to ‘Make Public Service Great Again’,” announced “Danny” Malouf, Republican candidate for Congress in the 14th District of Illinois. “Once elected I will donate back to my district half my salary.”
“Talk is cheap and the people of Illinois, overwhelmed with systemic corruption in their government and elected officials, deserve better and I intend to lead by example,” Danny continued. “Accordingly, I am taking this opportunity to announce that I will donate half of my congressional salary, $87,000 dollars every year I serve my district in Congress, back to the non-profit organizations in my 14th Congressional District.”
Current congressional salaries are $174,000 dollars annually, along with retirement and healthcare packages unrivaled in America today. There is no other candidate for Congress in the United States of America who has offered to make a specific commitment to return and invest a significant portion of their salary back into their districts and Malouf's promise is unprecedented.
“The people are tired of seeing their elected officials become millionaires while in office; of forgetting where they came from and who they are supposed to serve,” Danny continued. “I believe it is an honor and privilege to be chosen by the voters one represents and I want to 'Make Public Service Great Again’. Where one keeps their treasure is where their heart remains, and my commitment to the 14th Congressional District is both whole hearted and unrivaled.”
The 14th Congressional District covers a crescent north and west of Chicago from the Wisconsin border to Joliet covering parts of Lake, MeHenry, Kane, DuPage, DeKalb, Kendall and Will counties covering 1598 square miles.