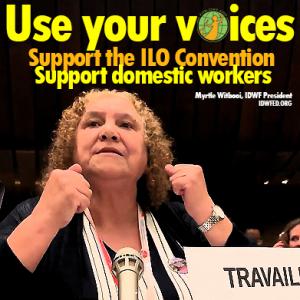 Come and celebrate the International Domestic Workers’s Day! Learn about the struggle and the victories of the domestic workers around the world! 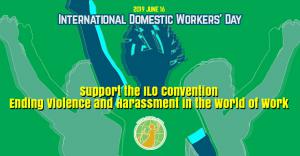 Let’s support the ILO Convention on ending Violence and Harassment in the World of Work!

Domestic workers from across the globe will share their stories to explain why an ILO convention with a recommendation is critical to help to put end to GBV.

This year on June 16 at 10 am in Geneva, domestic workers leaders of the International Domestic Workers Federation led by Myrtle Witbooi, the President, will gather at the IUF, a global union federation for food workers to celebrate the 8th International Domestic Workers Day and to remind governments about their unfinished business to stop gender-based violence in the world of work.

Domestic workers from across the globe will share their stories of resilience and struggle to explain why an ILO convention with a recommendation is critical to help them to put end to gender-based violence. The event will be a great opportunity for all, including governments, employers, trade unionists and advocates, to interact and learn from domestic workers themselves about their victories and challenges from Asia, Latin America, and Africa to Europe.

Eight years ago, governments, employers and workers jointly gave birth to the ILO Convention 189 on Decent Work for Domestic Workers. Since then, 28 governments around the world have ratified the Convention and more have enacted legal reforms leading to positive changes for domestic workers in many places. “Governments must support a new convention to enable domestic workers a fair playing field to achieve rights, dignity and respect”, says Myrtle Witbooi, IDWF President.

Domestic workers experience a high degree of exposure to violence due to very asymmetrical power relations, isolation, undervaluation and low recognition of their occupation and insufficient effective legal protections. “They are invisible, their work is hardly valued, and poorly paid. This is because it is connected with the unpaid care work of the ‘mother in the household’. Domestic household work is rarely seen as ‘work’ just something that women, or too often children do in the homes of others as ‘help out’”, says Novelita V. Palisoc, IDWF Asian regional representative. Violence takes place in different forms in the domestic work including physical, psychological and sexual violence. “Gender based violence is a pervasive problem in our sector, 8 out of 10 domestic workers reported to have suffered from some types of violence in their work and this is why we are here to ensure we will a strong convention to stop gender based violence" says Carmen Britez, IDWF Vice President and Latin America regional representative.

Use your voices, support the ILO Convention, supoort domestic workers!