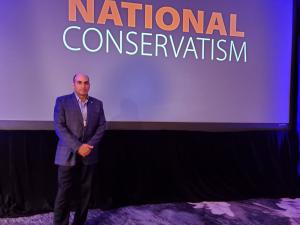 John Hajjar at the Conference on National Conservatism

WASHINGTON, DC, USA, July 16, 2019 /EINPresswire.com/ — John Hajjar represented the America Mideast Coalition for Democracy at the inaugural conference of ‘National Conservatism' along with other pro-freedom Middle East American activists at the Ritz Carlton in Washington DC on July 15, 2019.

Mr. Hajjar articulated AMCD’s strong support for the Trump Administration’s policy in the Middle East. He voiced unequivocal support the US withdrawal from the flawed Iran deal and support for the administration in siding with moderate Muslim leaders against the radical Ikhwan.

During the conference, Mr. Hajjar also met with the French delegation and spoke at length about the situation in Lebanon.

Mr. Hajjar also expressed support for President Trump’s prioritizing of American citizens over non-citizens as the proper role for American leadership. Most Middle Eastern Americans are legal immigrants or are descended from legal immigrants and they resent illegal immigrants swamping the asylum process. There are numerous persecuted minorities in Middle East who are truly deserving of asylum status, but America’s asylum system is being overwhelmed by hundreds of thousands of economic migrants who are gaming the system by filing false claims at the border.

Mr. Hajjar also encouraged Mideast Americans to support the Trump Administration by running for public office. Moderate voices supportive of sound public policies must be lifted up so they are not drowned out by the one or two radicals who gain notoriety by saying outrageous things.

Said Mr Hajjar: “Most Middle Eastern Americans are solid, sensible people who love our country. As election year 2020 approaches, we need to demonstrate that fact to our fellow Americans and vote the radicals out.” He added that “Americans of Middle Eastern descent are proud and nationalistic Americans who have made solid contributions to their country and fully appreciate the fact that the gains and accomplishments they have made in America could happen nowhere else.”