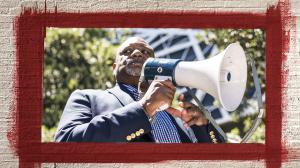 Rev. Shaw regularly tours community leaders and groups through CCHR International’s “Psychiatry: An Industry of Death” museum that details the history of psychiatry’s abuses, including racism dating back to the “Father of American psychiatry,” Benjamin Ru

Being oppressed and subjected to racism is a human rights abuse, not a ‘mental disorder.’”
— Rev. Fred Shaw

CLEARWATER, FLORIDA, UNITED STATES, July 18, 2019 /EINPresswire.com/ — While July is recognized as Minority Mental Health Month, Rev. Frederick Shaw, spokesperson for the Citizens Commission on Human Rights International (CCHR) warns that it can be used to stigmatize African Americans and put them at risk of harm from psychiatric treatments prescribed them. Rev. Shaw, who is also the Executive Director of the Inglewood-South Bay branch of the NAACP said that Minority Mental Health Month was started with good intentions by author, the late Bebe Moore Campbell, but it’s been used to target African Americans, Hispanics and others, getting them, hooked on damaging psychotropic drugs and even electroshocked. (Click here to sign CCHR’s Petition to Ban ECT.)

Rev. Shaw said the pharmaceutical interests alone should beg questions about the veracity of a program that claims 20% of African Americans are more likely to experience serious mental health problems than the general population. [2] He stated: “Being oppressed and subjected to racism is a human rights abuse, not a ‘mental disorder.’ Claiming this requires treatment—mind-altering antidepressants, antipsychotics, and brain-damaging electroshock—is mind slavery. These so-called treatments physically and mentally incapacitate people.”

Professor Herb Kutchins co-author Making Us Crazy – DSM: The Psychiatric Bible and the Creation of Mental Disorders said: “Defenders of slavery, proponents of racial segregation…have consistently attempted to justify oppression by inventing new mental illnesses and by reporting higher rates of abnormality among African-Americans or other minorities.” [3]

Dr. Rick Wallace, Ph.D. also says that “mental illness diagnosis is highly subjective” and is “far from an exact science. Modern psychiatry has expanded its reach to the point that even the most normal of emotions and mental states are now labeled as one ‘disorder’ or another.” [4]

African American men have been labeled with schizophrenia at a rate at least five times higher than other groups. [5] African Americans are also targeted for learning disorder labeling. Dr. Wallace called this, “The Black Academic Holocaust,” stating: “Not only is there an issue with young black students being disproportionately diagnosed with learning disorders, but they are also being prescribed psychotropic drugs at an alarming rate — with some being prescribed these medications as early as at the age of 18 months.” [6]

Shaw says Mental Health Month should be a warning and highlight the history of betrayal of African Americans when offered “help” in the name of mental health care.

• In 1792, the “father of American psychiatry,” psychiatrist Benjamin Rush, declared that Blacks suffered from a disease called Negritude. The “cure” was when their skin turned “white.” Like lepers, Rush said, they needed to be segregated for their own good and to prevent their “infecting” others. [9]

• African Americans were diagnosed with Drapetomania (drapetes, runaway slave, and mania, meaning crazy) and Dyasethesia Aethiopis (laziness and impaired sensation). Drapetomania gave Blacks the “uncontrollable urge” to run away from their “masters.” The “treatment” was “whipping the devil out of them.” [10]

• 1970s: Psychiatrist Louis West, a Central Intelligence Agency-funded psychiatrist, made plans for a program to conduct genetic and biochemical studies to "predict the probability of occurrences" of violent behavior in young, black urban males. [13]

• 1990s: NIMH director, psychiatrist Frederic Goodwin, compared inner city youth (mostly black or Hispanic) with "hyperaggressive" and "hypersexual" monkeys in a jungle. [14] Goodwin approved funding for a “Violence Initiative” aimed at identifying violent inner-city children, some as young as five, that would need “psychiatric intervention,” which included Prozac or other antidepressants. [15] Yet, “The link between antidepressants and violence, including suicide and homicide, is well established,” stated Patrick D. Hahn, affiliate professor of Biology at Loyola University, Maryland [16]

Rev. Shaw says that “after hundreds of years of oppression, psychiatrists have re-defined this abuse as African Americans being prone to violence and then prescribing them drugs to ‘help,’ yet they create the violence and psychosis we are accused of.” He recommends anyone who has been abused in the mental health system to contact CCHR.

Complete documentation of all statements can be found here: https://www.cchrflorida.org/cchr-says-minority-mental-health-month-may-spell-mental-health-slavery/

Electroconvulsive “Therapy” —The Facts about ECT