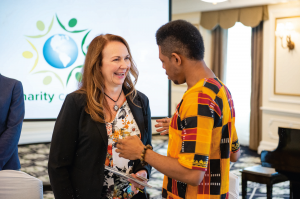 Nonprofit leaders at a bi-monthly Charity Coalition Luncheon on July 27th. Held at the Fort Harrison religious retreat, the Charity Coalition offers representatives of nonprofits the opportunity to meet and work together on similar goals.

Everything that has ever changed the world started with one person. You may think you are just one person, but one person can make a big difference.”
— Raul Arias Perez, human rights advocate

CLEARWATER, FLORIDA, USA, July 31, 2019 /EINPresswire.com/ — On Wednesday, July 27th, the Church of Scientology Flag Service Organization hosted a bi-monthly meeting of the Tampa Bay Charity Coalition in the Fort Harrison’s Crystal Ballroom, downtown Clearwater. Over six dozen Tampa Bay nonprofit representatives networked, learned about one of the charities and heard from Raul Arias Perez on his fight against human trafficking in Mexico.

“We established the Charity Coalition five years ago to bring nonprofits together and contribute a community-oriented force for good in Tampa Bay,” said Ms. Chevrot. “By survey, we found that people decide to volunteer for or donate to a charity because the cause matters to them or the charity’s event sounded like fun, but most of all, because of the rewarding feeling you get when you help.”

To give an example of this, Ms. Chevrot welcomed Ms. Joanie Sigal, Chairwoman of the Clearwater Community Volunteers (CCV) Fashions with Flair Fashion Show. Ms. Sigal is a long-time Clearwater-area volunteer who sits on the boards of several nonprofits, including the Clearwater Jazz Holiday. Ms. Sigal spoke about how rewarding it has been to help CCV raise more than $200,000 over the past 15 years to provide underprivileged youth with food and toys.

Mr. Arias shared his story of the national campaign he created to combat human trafficking in Mexico. He knew he had to do something after hearing from parents whose daughter became a human trafficking victim. Since then he has been educating millions on the United Nations Universal Declaration of Human Rights through the Youth for Human Rights program. One result of his campaign was to change the constitution of a Mexican State to allow for greater consideration of human rights.

Arias encouraged the audience to keep moving forward with their missions. He said, “Everything that has ever changed the world started with one person. You may think you are just one person, but one person can make a big difference.”

A speed networking segment followed wherein attendees had one minute to exchange as many business cards as possible. A few guests commented that they made more new contacts in one minute than in a whole week.

The next Charity Coalition function will be its 5th Anniversary Banquet on the 14th of September in the Fort Harrison’s auditorium. To attend or find out more about the Charity Coalition please contact Clemence Chevrot at (727) 467-6860 or Clemence@cos.flag.org.

About the Church of Scientology:

The Scientology religion was founded by humanitarian and philosopher, L. Ron Hubbard. The first Church of Scientology was formed in the United States in 1954 and has expanded to more than 11,000 churches, missions and affiliated groups, with millions of members in 167 nations. Based on L. Ron Hubbard's words, "A community that pulls together can make a better society for all," the Church of Scientology regularly engages in many humanitarian programs and community events. To learn more, visit www.scientology-fso.org.