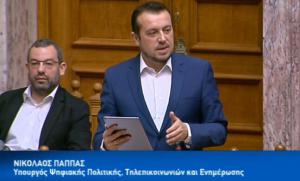 Nikos Pappas, the former Minister of Information of Greece with his assistant and former published of the newspaper “To XONI”, Mr. George Christoforidis

The former Minister of Information in Greece will remain unpunished for his alleged actions that victimized a representative of the press in the country.

NEW YORK , NEW YORK, UNITED STATES, September 4, 2019 /EINPresswire.com/ — The Association of Foreign Correspondents in the United States (ForeignPressCorrespondents.org), which constitutes the independent body of representation of foreign journalists in the United States, expresses its deep concern about the state of press freedom in Greece over the past five years. The Association explicitly condemns the practices developed by the previous SYRIZA government against independent journalists and press representatives who were attacked with fake news manufactured by the state-owned media.

On behalf of the foreign journalists in the United States, the Association of Foreign Correspondents expresses its full solidarity with our colleague, journalist, and foreign correspondent from Greece Mr. Thanos Dimadis in regard to the lawsuit for defamation he filed against the former Minister of Information in the country, Mr. Nikos Pappas.

According to declassified documents from the State Department first published by National Herald, Mr. Pappas allegedly abused his political power over the state-owned news agency of Greece to plant a false story against Dimadis. The Athens News Agency, which fell under the former Minister of Information, diffused in 2016 the story that Mr. Dimadis, then employed by Greece’s ALPHA TV Channel, had been arrested by the NYPD and FBI and was facing criminal charges in New York in relation to an undercover reporting concerning the Minister. Once the State Department released declassified documents refuting Mr. Pappas, Mr. Dimadis filed a lawsuit claiming defamation of character.

Mr. Pappas appealed for political immunity, a special privilege that Greek law grants only to its politicians, allowing them to avoid being held accountable by the judiciary system. Due to this deeply anti-democratic and anachronistic law, the former Minister of Information will remain unpunished for his alleged actions that victimized a representative of the press and attacked press freedom at its core.

Commenting on the case, Susan Modaress, Vice President of the Association of Foreign Correspondents, stated that "we express our solidarity and stand by foreign journalist Thanos Dimadis and we are ready to provide to Mr. Dimadis any support he may need to hold those responsible for his defamation accountable".

Manoj Rijal
The Association of Foreign Correspondents in the USA
+1 718-593-1984
email us here
Visit us on social media:
Facebook
Twitter
LinkedIn