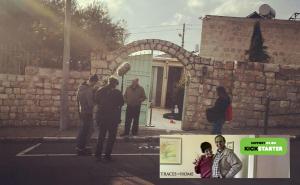 Kickstarter campaign launched for new film that seeks to provide accurate representations of the American immigrant community through her personal story.

CHICAGO, IL, USA, September 16, 2019 /EINPresswire.com/ — Colette Ghunim, Chicago-based director of the award-winning documentary "The People's Girls", which investigated the issue of sexual harassment in Egypt, is currently working on her first feature-length film, "Traces of Home".

"Traces of Home" explores the tragic pasts of Ghunim’s parents, Hosni and Iza. Her father, Hosni, was forced to flee with his parents from political strife from his native Palestine. Meanwhile, Ghunim’s mother Iza fled an abusive father in Mexico with her mother. The film documents the family’s return to their childhood homes in Mexico and Palestine, examining what it means to be both an immigrant and Colette’s disconnect from her identity in the process.

With the ongoing national discussion involving the plight of immigrants and their contribution to American culture, "Traces of Home" offers viewers a rare glimpse into the world of a family whose lives were forever altered by their decision to come to America.

"My goal is to provide a positive narrative for the Latino and Arab communities across the nation,” said Ghunim, “while exploring how first-generation Americans like me continue to struggle with our lack of cultural belonging anywhere."

The Kickstarter campaign, going on now, must reach its goal of $35,000 by 12pm on October 4th, 2019 in order to receive any of the funds pledged by its backers. The film announced the Kickstarter launch with an event that raised $5500 celebrating Mexican culture in the heart of Pilsen at La Luz Gallery with food, DJ, dancing, stand up comedy with Gwen La Roka, a raffle, a live Kickstarter raise, presentation by Mujeres Latinas en Accion and Alderman Byron Sigcho Lopez, and a screening of the new trailer for Traces of Home. Ghunim and her team will continue fundraising in order to meet its goal by October 4th.