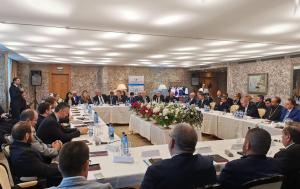 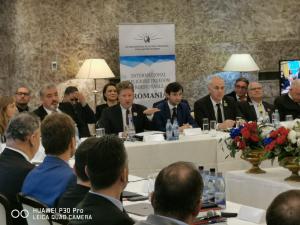 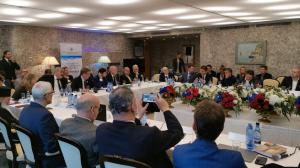 Mr. Titus Corlatean Vice-President of the Senate of Romania speaking on the importance of religious freedom

We must work together to protect communities of any faith.”
— President Donald Trump

In July 2018, Secretary of State Mike Pompeo hosted the first Ministerial to Advance Religious Freedom and launched the invitation to build a Global Alliance between governments and strengthen the IRF Roundtable project. The second ministerial meeting organized in 2019 attracted the participation of over 100 governments and more than 1000 participants from the civil society, bringing life and force to this project.

Since the first ministerial meeting, US Ambassador for International Religious Freedom, Sam Brownback, and his team from the International Office for Religious Freedom within the US Department of State, have perfected this vision by working closely with other governments and with the IRF Roundtable Washington, DC with the goal to bring together different groups and form round tables in 100 countries around the world.

President Donald Trump is also the first US President to hold a meeting recently at the United Nations on religious freedom, emphasizing that "protecting religious freedom is and has always been one of my highest priorities." "We must work together to protect communities of any faith," President Trump said.

The IRF Roundtable brings together representatives of all faiths and none, non-governmental organizations, civil society leaders and even governments that protect and promote religious freedom, to coordinate joint advocacy efforts and discuss religious freedom issues. To date, the IRF Roundtable project has been launched in only a few countries such as South Korea, Nigeria, Colombia, Taiwan, Ukraine, Belgium and Italy. Romania is joining them, thus launching also a model for the entire East-European region.

IRF Roundtable Romania was held at the exquisite Hotel Inter Venus located in Constanta county, the county with the greatest religious diversity in Romania. It was attended by leaders of many religions in Romania, including His Eminence Teodosie, Archbishop of Tomis from the Romanian Orthodox Church, Pastor Viorel Iuga, President of the Congress of the Evangelical Alliance in Romania, and Murat Iusuf, Mufti of the Muslim Community in Romania.

At the roundtable discussions, there were also military chaplains, diplomats, mayors, the Vice President of the Senate of Romania, foreign officials from the United States of America, Bulgaria and Montenegro, as well as various representatives of the civil society.

The participants got involved in multi-religious dialogue and exchanged ideas regarding the current challenges of religious freedom in the world, but especially in Eastern Europe.

Special guests included Mr. Greg Mitchell, Chair of the International Religious Freedom (IRF) Roundtable from Washington, DC, as well as senior representatives of the US Agency for International Development (USAID), Mrs. Kristen Evans Director of the Center for Faith and Opportunity Initiatives and Mrs. Cristina Li Senior Advisor USAID, Muhammad Latif Lead Sr. Engineering and Infrastructure Officer USAID, Office of American Schools and Hospitals Abroad (ASHA), Chief Chaplain Captain Wayne MacRae, Office of the Chairman Joint Chief of Staff, Pentagon, and Mr. Veljko Milonjic, Director General for Multilateral Affairs at the Ministry of Foreign Affairs of Montenegro. They were joined by several diplomatic representatives from the US Embassy in Romania and the Bulgarian Embassy in Romania.

After the roundtable, participants were divided into working groups to discuss specific topics in side events. Military chaplains and religious leaders met in a panel discussion on peacebuilding through religious freedom, and representatives of the civil society, diplomats and officials from USAID discussed on the understanding of the socio-economic value of religious freedom in Romania and Eastern Europe.