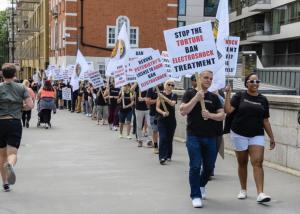 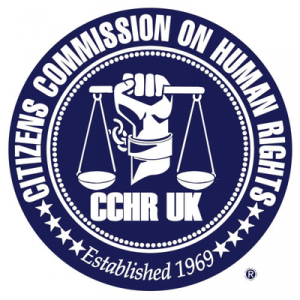 LOS ANGELES, CALIFORNIA, UNITED STATES, October 10, 2019 /EINPresswire.com/ — Citizens Commission on Human Rights (CCHR) led by the group’s national director Brian Daniels picketed Maudsley Hospital to protest the institution’s use of electroconvulsive treatment (ECT), which passes up to 460 volts of electricity through the brain causing a grand mal seizure that can result in permanent memory loss and brain damage.

Key facts about ECT are not promoted by the psychiatric industry in the UK. For example, teens are being subjected to ECT in the UK, where it is estimated from Freedom of Information requests that from 2016 to 2018, 5,165 patients age 16 to 98 were given electroshock.

What's more, UN Special Rapporteur on Torture and Other Cruel Inhuman or Degrading Treatment or Punishment has condemned the use of coercive electroshock.

The Royal College of Psychiatrists admits that no one is certain how ECT works.

A classic example of the irreparable damage and tragedy of the use of ECT was the suicide of Nobel prize-winning author Ernest Hemingway. “What is the sense of ruining my head and erasing my memory, which is my capital, and putting me out of business?” he wrote in his suicide note. “It was a brilliant cure but we lost the patient.”

The work of Brian Daniels and his UK CCHR team is presented in an episode of "Voices for Humanity" on the Scientology Network.

Citizens Commission on Human Rights is a nonprofit charitable mental health watchdog founded in 1969 by the Church of Scientology. It is dedicated to eradicating psychiatric abuse and ensuring patient protection.