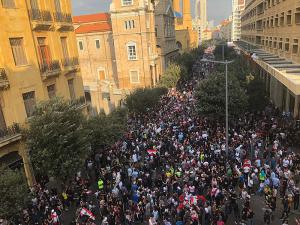 WASHINGTON, DC, USA, October 30, 2019 /EINPresswire.com/ — The American Mideast Coalition for Democracy supports the Lebanese demonstrators fully and shares in their hopes and demands for a democratic, sovereign state free from corruption, domestic militias, and foreign domination.

“The rampant corruption throughout Lebanon has facilitated Hezbollah’s control of the Lebanese government and military,” said AMCD co-chair, Tom Harb. “This corruption combined with Western sanctions against Hezbollah is now plunging the economy into collapse. As a result, the poverty rate in the country is skyrocketing. We receive reports from the suffering people daily.”

“The resignation of PM Hariri and his cabinet is welcome news,” continued AMCD co-chair, John Hajjar. “We urge the Lebanese Armed Forces to continue to keep the peace and to put down any violence forcefully, including the attacks on peaceful protesters by vicious Hezbollah thugs. Furthermore, we call on General Joseph Aoun, head of the Lebanese armed forces, to protect the people as they demonstrate for their just cause. And we demand full accountability for all those who have served in government and any related entities or parties who have looted the country for years.”

“We encourage all friendly nations to stand in support of the Lebanese people and their God-given rights to live in a free, prosperous nation that abides by the rule of law,” added AMCD vice-chair, Hossein Khorram.

“Hezbollah should be disarmed and the Iranian Revolutionary Guard expelled from the country so that the people can finally be free from their corrupt domination,” continued Mr. Harb. "We fear that Hezbollah may exploit the current crisis to tighten its grip on Lebanon and suppress the will of the people. We call on the US, France and other Western nations to take any and all steps to prevent this from happening."