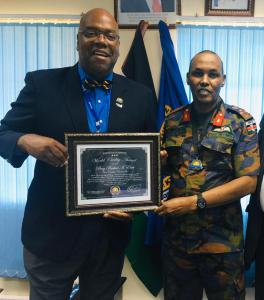 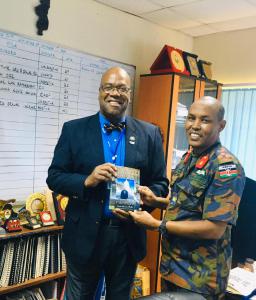 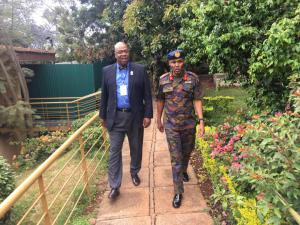 Leader Of Kenya Peace Center Received the prestigious World Civility Award, for the work that is being done by the International Peace Support training centre

it's always a great privilege to find great leaders in Africa that are making a difference for the world. We have found one in Brigadier. Rashid A. Elmi, We are grateful for your contribution”
— The global spokesman for World Civility Dr. Clyde Rivers

KAREN, KENYA, November 4, 2019 /EINPresswire.com/ — in Karen Kenya the Leader Of Kenya Peace Center Received the prestigious International World Civility Award, for the work that is being done by the International Peace Support training centre. The work is heroic in the respect that they are aiding several countries in the world to the process of peace. They have training programs on all levels, such as prevention, intervention and integration after conflict have taken place. This peace training centre has done so much good under the leadership of Brigadier. Rashid A. Elmi to bring a true understanding of how to make peace lasting and to take peace in the world. I have personally seen the excellence of the peace training centre in Karen, Kenya. It's truly a world class operation for civility.

The kind words from Brigadier. Elmi, to his staff and leadership at the International Peace Support Training Centre. A special thanks to Col. Joyce Sitienei, Col. Haycall Maghanga, Lt Col. Hosborn Wasike, Lt Col. Hilary Kipkurui, WO2. Agnetta Rotich, Sgt. Josphat Kamau, Sgt. Michael Omoit and Sgt. Gideon Maingi for their leadership in the building of this institution. This work of global leadership in peace building has come from everyone of us and our staff. This is the first institution of this type in the world to have leadership receive this award. The world will follow your great pattern for peace.

I Change Nations is a Culture of Honor System, the organization is committed to bringing back the lost art of honor by building a Culture of Honor that recognizes individuals throughout the world who have exemplified extraordinary humanitarian efforts to effectively change nations. We honor people and organizations that believe every life is valuable and is created to bring a contribution to the world. ICN is the largest “building cultures of honor” network in the world.

I Change Nations was founded by Dr. Clyde Rivers, Dr. Rivers is the acting Representative to the United Nations – New York for the Interfaith Peace-Building Initiative (IPI) and the United Nations Department of Public Information (DPI Dr. Rivers is the acting Ambassador and the Director of the North American Division of the Golden Rule International
Dr. Clyde Rivers is the Spokesperson for the World Civility Day, Community Civility Counts Initiative, Dr. Rivers has been honored internationally and has received numerous awards. Recently Dr. Clyde Rivers, received his 2nd Presidential Award for 2019 at the United Nations Association of El Salvador in New York City, Dr. Rivers received the Presidential Award for his volunteer service to the citizens of the United States of America. In 2017 Dr. Rivers won the United States Presidential Life Achievement Award for over 4,000 hours of serving the nation and humanity Dr. Rivers is the recipient of the Danny K. Davis Peace Prize 2017, U.S. Congressman of Illinois. This annual Congressional Award given for excelling in his field and making a difference in people’s lives.In 2017 Dr. Rivers was given the Title of Don/Sir Dr. Clyde Rivers as he was Knighted into the original Kingdom of Guatemala, and the great city of La Antigua the first city established by the Spanish Monarchy. Knighted by Lord EDUARDO L. PRADO S. the Commodore De Santiago De Los Caballeros De La Antigua Guatemala Dr. Rivers is the recipient of an Honorable Mention for the American Civic Collaboration Award 2017 – Celebrating Partnerships that Strengthen America Dr. Clyde Rivers is the Honorary Ambassador at Large for the Republic of Burundi, as appointed by H.E. President Pierre Nkurunziza and Special Advisor to President Pierre Nkurunziza, President of Republic of Burundi Africa.