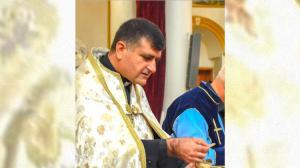 WASHINGTON, DC, USA, November 13, 2019 /EINPresswire.com/ — On President Erdogan’s visit to the White House today, the American Mideast Coalition for Democracy (AMCD) is urging president Trump to forcefully bring up the murder of Armenian Catholic Father Hovsep Bedoyan and his father in Northeast Syria – the area from which US forces withdrew allowing Turkey to invade.

“President Erdogan assured the US that Turkey would prevent any ISIS resurgence in the area,” said AMCD co-chair Tom Harb. “So Turkey must be held ultimately responsible for this horrific murder for which ISIS has claimed responsibility.”

It has long been suspected that Turkey actually aided ISIS in Syria (both by allowing ISIS fighters transit over Turkish soil, and by indirectly supplying arms). Indeed the Muslim Brotherhood-allied militias operating under Turkish auspices differ little from ISIS in terms of ideology.

“President Trump must insist on the protection of minorities in what is now Turkish-controlled territory in Northeastern Syria,” stated AMCD co-chair, John Hajjar. “The murder of this innocent priest cannot be swept under the carpet of major power politics.”