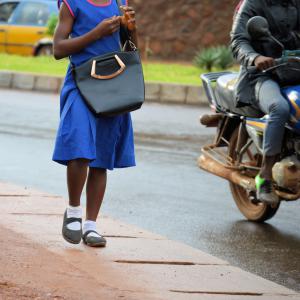 Girl on her way to school in Sierra Leone

West Africa’s top court orders Sierra Leone to revoke a ban on pregnant girls in school, ruling it's a discriminatory violation of the right to equal education.

This is a great victory! Finally, the girls have had their day in court and have emerged victorious. The ECOWAS court has given them their voices back and by that a chance at life again.”
— Judy Gitau, Equality Now

ABUJA, NIGERIA, December 12, 2019 /EINPresswire.com/ — The Economic Community of West African States (ECOWAS) Court of Justice has found that the government of Sierra Leone breached the right of pregnant girls to education by prohibiting them from accessing school.

In a succinct and powerful judgement, the Court found that the Government had not only put in place a discriminatory policy barring pregnant girls from school but had also failed to put in place measures to reduce teenage pregnancies in line with the National Strategy for the Reduction of Teen Pregnancies, which was adopted after the civil war.

The Court found that the Government had discriminated against the girls by setting up parallel schools that were suboptimal and limited as girls would only be taught four subjects and learn just three days a week.

In a landmark decision for the West African region and Africa in general, the Court declared the ban discriminatory and ordered the Government of Sierra Leone to lift it with immediate effect.

Further, the Court ordered the Government to put in place measures including social programmes to address increased numbers of teenage pregnancies and sensitize the communities against discrimination.

WAVES, Child Welfare Society, Equality Now and Institute for Human Rights and Development in Africa IHRDA filed the case against Sierra Leone’s government in May 2018.

Speaking in Abuja at the sidelines of the judgment reading, Hannah Yambasu Executive Director Women Against Violence and Exploitation in Society (W.A.V.E.S) said she was overjoyed. “This victory belongs to the girls in Sierra Leone who have been degraded and dehumanized because of their status since 2014. Now our government in Sierra Leone has no option but to comply with their obligations as declared by the Court.”

Judy Gitau, Africa Regional Coordinator at Equality Now, was at court as the agent of the girls, and said, “This is a great victory! Finally, the girls have had their day in court and have emerged victorious. The ECOWAS court has given them their voices back and by that a chance at life again.”

Amnesty International was Amicus Curiae in the case and was also present at the judgment reading.

The Court sought clarification since the government of Sierra Leone had initially denied the existence of a policy and claimed it was an unfortunate statement by a state minister. The Court held that the Government took what was a sporadic practice of banning pregnant girls from accessing school and entrenched it as state policy.

The Court specifically held that:

● There exists a policy which was discriminatory against pregnant schoolgirls in Sierra Leone as it barred them from attending mainstream schools. The Court held that the Government was in breach of its commitments and responsibility under both local and international law particularly Articles 2, 3, 17, 18, 25 of the African Charter; Article 21 and 28a of the Convention on the Rights of the Child, and Articles 1 and 3 of the Convention Against Discrimination in Education.

● With regard to alternative schools for pregnant girls, the Court held that the establishment of separate schools with four taught subjects operating three days a week was discriminatory and a violation of the right to equal education.

● The Court ordered that the prohibitive policy be revoked with immediate effect and that the Government of Sierra Leone take steps to abolish the alternative schools established for pregnant girls.

● The Court asked the Government to develop strategies and nationwide programmes that focus on reversing negative societal attitudes that support the discrimination and bias against pregnant girls. These strategies and programmes must enable teenage mothers to attend school.

● The Government was ordered to integrate Sexual Reproductive Health Rights into the school curriculum and to increase knowledge on family planning and contraceptive to address high teenage pregnancy rates.

Sexual violence remains widespread in Sierra Leone with women and girls bearing the brunt. In 2018, the Family Unit of the Sierra Leone Police recorded 8,505 rape cases including 2,579 that involved minors. Many more went unreported owing to various gaps in reporting systems and the associated stigma and shame.

Women Against Violence and Exploitation in Society (W.A.V.E.S) is a registered indigenous non-governmental organization with its vision, mission and values geared towards women’s empowerment and protection. WAVES strives to achieve a non-violent, non-discriminatory and non-exploitative environment for women and children.

Equality Now is an INGO and human rights organization founded to advance the rights of women and girls globally. It holds governments responsible for ending legal inequality, sex trafficking, sexual violence and harmful practices such as FGM and child marriage. Equality Now champions legal and systemic change by setting important legal precedents and exposing barriers that hinder access to justice.

Equality Now has been working with W.A.V.E.S, Defence for Children International (DCI) Sierra Leone, Women’s Partnership for Justice and Peace (WPJP), Graceland Sierra Leone, Child Welfare Society (CWS), and the Education for All Coalition – Sierra Leone, to call on the government to lift the ban on pregnant girls attending regular schools; make schools are safe spaces for girls, and ensure perpetrators of sexual violence are punished.

We are Purposeful is a feminist movement-building hub for adolescent girls that amplifies girls’ voices; resources their resistance; builds solidarity between and across girls’ movements, and catalyzes collaborative philanthropy and support innovation in grassroots programming with and for girls.

The Coalition for Girls Education comprises over 30 organizations among them national NGOs, UN Agencies and international NGOs that focus on conveying the importance of girls’ access to education, sparking a national conversation on the impact of the ban of the rights of girls in Sierra Leone. It is a subset of the Sierra Leone Adolescent Girls Network and works to empower adolescent girls with improved health, social, economic and cognitive assets while protecting their human rights and elevating their status.