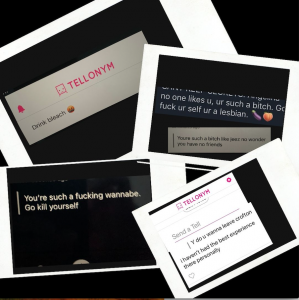 Screen shots from messages sent via the app Tellonym

So let me ask our Government, why are we allowing apps that facilitate bullying, harassment, or self-harm in our country? Why are Tellonym and YOLO still available?”
— Natalie Boll

VANCOUVER, BC, CANADA, December 13, 2019 /EINPresswire.com/ — A Vancouver mom and film producer Natalie Boll has started an online petition to ban the popular anonymous apps Tellonym and YOLO after her daughter is urged to "Kill herself" and "Drink bleach" by messages on the apps.

Natalie explains that the past year had been hell for her family after her daughter was a victim of relentless bullying at her school. The bullying started in grade 7 at the Vancouver based private all-girls school Crofton House and later spread to the anonymous online apps Tellonmy and then YOLO. As a result of the bullying at the school and online her daughter overdosed at her school and since was admitted into Children's Hospital on suicide watch and self-harming

"One evening, my sister in Montreal, daughter, had seen messages on my daughter's Tellonym profile linked to her Instagram profile. The messages were telling my daughter," "KILL YOURSELF," and "DRINK BLEACH." The messages continued, and the only way to protect my daughter was taking away her phone. Over the summer, while we were abroad, my daughter started to get more messages on the YOLO app, including ones talking of gang rape. I immediately deleted the app and all the messages."

The messages came to her daughter through the apps Tellonym and later YOLO, which are both free to download on the Apple App Store and Google Play. They are both anonymous apps where people can make anonymous accounts and send anonymous messages to and about others.

Much like the case made for the app Sarahah, the anonymous nature of these apps has become a breeding ground for hate, encouraging self-harm and suicide, which resulted in the Sarahah app being banned in many countries, including Canada.

A study presented at the Pediatric Academic Societies meeting this past May (2017) found that the number of children and teens admitted to children's hospitals for thoughts of suicide or self-harm has more than doubled during the last decade.

Students that are bullied are around 2 to 9 times more likely to consider suicide than non-victims. Canada has the 9th highest rate of bullying in the 13-years-olds category on a scale of 35 countries. A study also found that at least half of suicides among young people are related to bullying. 10 to 14-year-old teen girls are most likely to commit suicide based on this study. Nearly 30% of students are either victims of bullies or bullies themselves, and 160,000 kids stay home from school every day because they are scared of being bullied.

"Both the App Store and Google Play have policies against bullying and harassment, and our Canadian Government spends thousands of dollars on anti-bullying campaigns and mental health for our children. So let me ask our Government, why are we allowing apps that facilitate bullying, harassment, or self-harm in our country? Why are Tellonym and YOLO still available on these platforms?"

The petition was started in the hopes it gains the traction of the similar campaign created by another mother, Katrina Collins, for a very similar case for the app Sarahah that was later dropped from both Apple and Google.

Let's not have another child die as a result of these apps! You can join the petition on Change.org here. http://chng.it/MN7mTqZLZL.