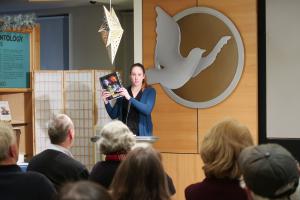 Youth for Human Rights educator’s guide makes it easy for teachers to educate youth on their rights. 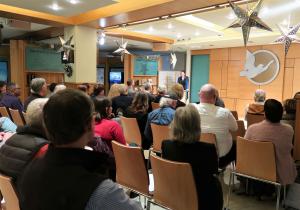 The open house at the Church of Scientology Seattle focused on human rights education as an important element in combatting human trafficking. 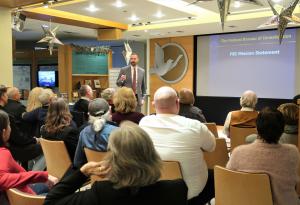 A special agent from the Seattle FBI Field Office was the featured speaker at the open house. 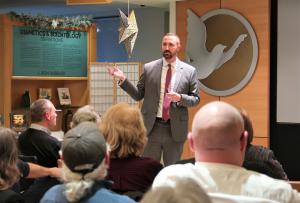 He emphasized the problem of human trafficking in the area.

At a forum at the Church of Scientology Seattle, the local chapter of Youth for Human Rights takes up human trafficking in Washington State.

A special agent of the Seattle FBI Field Office was the featured speaker who underscored the problem of human trafficking in the area, noting that the crime of slavery is a major problem in cities across the U.S. and globally.
According to Washington’s Office of the Attorney General, Washington state “is a hotbed for the recruitment, transportation, and sale of people for labor.” In 2003 “Washington was the first state to pass a law criminalizing human trafficking and we have the most stringent law in the country.” Seattle is “part of a trafficking circuit that can include Honolulu, Las Vegas, New Orleans, Portland, Vancouver (Clark County), Yakima and Canada.”

Earlier this year, Seattle police “rescued 26 women after a three-and-a-half-year human trafficking investigation into massage parlors across the city. After receiving dozens of complaints, police investigated 11 businesses and arrested six people for promoting prostitution and money laundering.” The Seattle Police Department was assisted in the investigation by the FBI and the U.S. Department of Homeland Security.

The director of Youth for Human Rights Seattle spoke of the theme for this year’s Human Rights Day, “Youth Standing Up for Human Rights,” and the UN’s aims: “to celebrate the potential of youth as constructive agents of change, amplify their voices, and engage a broad range of global audiences in the promotion and protection of rights.”

“Youth for Human Rights educates children about the Universal Declaration of Human Rights and inspires them to become advocates for tolerance and peace,” she said. “Children of every ethnic and socioeconomic background can be trapped into human trafficking and it is vital that they are educated on human rights so they can protect themselves and their friends from becoming victims.”

With the UN’s 90-page “Global Trafficking in Persons” report released earlier this year stressing that human trafficking of girls is on the rise, Youth for Human Rights has ramped up its efforts to reach educators by exhibiting and distributing free materials in conferences in Washington State so that they can reach as many youth as possible with the message of the Universal Declaration of Human Rights.

In 1969, Scientology Founder L. Ron Hubbard wrote, “Very few governments have implemented any part of the Universal Declaration of Human Rights. These governments have not grasped that their very survival depends utterly upon adopting such reforms and thus giving their peoples a cause, a civilization worth supporting, worth their patriotism.”