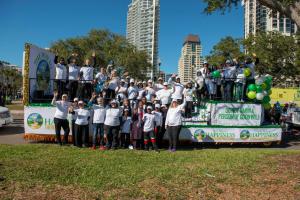 On Jan. 20 The Way to Happiness Association of Tampa Bay will participate in the MLK Dream Big Celebration’s parade. Pictured here are TWTH volunteers in their float at last year’s parade.

In celebration of MLK Day, TWTH Association of Tampa Bay will promote the precept “Do Not Harm a Person of Good Will” at the MLK Parade in St. Petersburg.

CLEARWATER, FLORIDA, UNITED STATES, January 12, 2020 /EINPresswire.com/ — For the second year in a row, The Way to Happiness (TWTH) Association of Tampa Bay will take part in the St. Petersburg’s MLK Dream Big Celebration parade on January 20th to raise awareness of precept number 11 of The Way to Happiness—a common sense guide for better living—“Do Not Harm a Person of Good Will.” At last year’s parade in 2019, 2,000 copies of The Way to Happiness were distributed.

“Dr. Martin Luther King Jr. was very much a man of good will,” said Tanja Cranton, the executive director of the TWTH Association of Tampa Bay. “We emphasize this precept because it states, ‘Factually, the society runs on men and women of good will. Public workers, opinion leaders, those in the private sector who do their jobs are, in the great majority, people of good will. … Yet such can be attacked and strong measures should be advocated and taken to defend them and keep them from harm, for your own survival and that of your family and friends depends upon them.’”

The MLK Dream Big Celebration is the longest-running MLK Jr. Day parade and one of the largest in the nation, established in 1986. In 2016, the Southern Christian Leadership Conference chose Advantage Village Academy (AVA) and Toriano Parker, AVA’s CEO, to bring a fresh direction to the historic St. Petersburg event, ensuring it would continue to celebrate the vision of Dr. King with a new generation. On Jan. 16, 2017, AVA hosted the rebranded 32nd Annual MLK Dream Big Parade and introduced a brand new route running west along 1st Avenue South starting at 3rd Street—as well as launching the inaugural MLK Dream Big Family Funday Festival at Tropicana Field. Conceived to bring parents, children, caregivers, and youth together with community organizations and presenters for hands-on play, learning and workshops.
________________

The Way to Happiness Association of Tampa Bay:

The Way to Happiness book was written and published by L. Ron Hubbard in 1981 as a nonreligious, common-sense guide to better living. Its purpose is to help arrest the current moral decline in society and restore integrity and trust to humankind. It is available in 112 languages, with some 115 million copies distributed in 186 nations. The campaign to distribute the book has been embraced by more than 257,000 groups and individuals and millions around the world have received the materials free of charge thanks to the continued sponsorship of the Church of Scientology. The Way to Happiness holds the Guinness World Record as the single most-translated nonreligious book and fills the moral vacuum in an increasingly materialistic society.