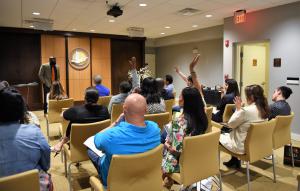 On Jan. 12, to raise awareness of human trafficking, United for Human Rights Florida held a screening in their center of an anti-human trafficking documentary. Pictured above is the Q&A period which was held to close the event.

CLEARWATER, FLORIDA, UNITED STATES, January 15, 2020 /EINPresswire.com/ — On Jan. 12, the Florida chapter of United for Human Rights (UHR), in honor of National Human Trafficking Awareness Day, held a free screening of the documentary "The Abolitionists." The film was shown in the UHR center in downtown Clearwater. Twenty-nine people were in attendance.

"The Abolitionists" is a documentary film about an operation by the nonprofit Operation Underground Railroad (OUR), founded by former U.S. Homeland Security Special Agent Tim Ballard, and details how OUR rescued 57 children from sex trafficking and arrested and incarcerated their 7 traffickers.

“Slavery has been around for thousands of years,” said Florida chapter UHR President and Founder of The Gentlemen’s Course, Christopher King. “It predates the birth of America. The only reason more people know it still exists today is because it is affecting the people we care about.”

A Q&A period by King followed the screening before closing the event. Guests shared their views on how to handle human trafficking situations in the state of Florida and King took the opportunity to further educate attendees on the scope of human trafficking by listing statistics:

• 2 million children, the majority of them girls, are sexually exploited in the multi billion-dollar commercial sex industry worldwide.
• 1 in 4 slavery victims are children.
• There are an estimated 40.3 million modern-day slaves according the International Labor Organization.

To learn more about what you can do to contribute to the anti-human trafficking movement or to participate in UHR Florida’s next event call 727-467-6960 or visit their Facebook page at https://www.facebook.com/humanrightsfl/.

United for Human Rights (UHR) is an international, nonprofit organization dedicated to implementing the Universal Declaration of Human Rights at local, regional, national and international levels. Its membership is comprised of individuals, educators and groups throughout the world who are actively forwarding the knowledge and protection of human rights by and for all.

The Church of Scientology sponsors the printing of educational materials for UHR and its youth education program, Youth for Human Rights. Central to Scientology beliefs and tenets is a conviction that all people are endowed with the inalienable rights as set forth in the Universal Declaration of Human Rights as ratified by the United Nations in 1948. L. Ron Hubbard, the founder of the Scientology religion, inspired the establishment of United for Human Rights with these words: “Human rights must be made a fact, not an idealistic dream.”