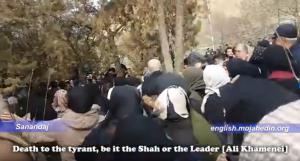 People of Sanandaj stage demonstration, chanting, “Khamenei is a murderer”

The protestors chanted, “Khamenei is a murderer", "Death to the oppressors, be it the Shah or the Leader”
— NCRI

PARIS, FRANCE, January 16, 2020 /EINPresswire.com/ — Iran: People of Sanandaj stage demonstration, chanting, “Khamenei is a murderer,” “Death to the oppressor, be it the Shah or the Leader.”

Earlier today, Thursday, January 16, 2020, a large group of people in Sanandaj, western Iran, took part in the burial of one of the innocent passengers of the Ukrainian airliner shot down by two IRGC missiles. They chanted anti-regime slogans despite the extensive presence of suppressive and security forces,

The protesters were chanting, “Death to the dictator,” “Khamenei is a murderer, his rule in null and void,” “Khamenei hear us, we are the people, not thugs,” “Death to the oppressors, be it the Shah or the Leader,” “I will kill whoever killed my brother,” “Death to Rouhani,” “We did not give martyrs to compromise and praise the murderous leader,” “They killed our best, put mullahs in their place.” Addressing the regime’s suppressive forces, the crowd chanted, “Death to terrorists,” “Bassijis, IRGC, you are the DAESH (ISIS).”

Yesterday afternoon, students staged a protest at the University of Sanandaj, chanting, “Death to the dictator,” “IRGC shame on you, leave the country alone.” In slogans directed against Bassij mercenaries brought to the scene to suppress the students, they chanted, “Cannons, tanks, firecrackers, Bassijis must get lost.”

Secretariat of the National Council of Resistance of Iran
January 16, 2020