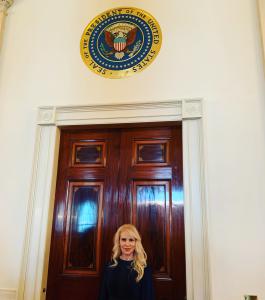 NEW YORK CITY, NY, US, February 10, 2020 /EINPresswire.com/ — Lynn Shaw, human rights activist and policy and legislative strategist for human trafficking and sexual exploitation and founding member of the Alliance to End Human Trafficking, had the honor of attending the White House Summit on Human Trafficking on January 31, 2020, to celebrate the 20 year anniversary of the Trafficking Victims Protection Act, the first law that made human trafficking a federal crime.

The Summit was spearheaded by Ivanka Trump, Senior Advisor to President Trump, who announced that efforts to prioritize the prevention of human trafficking were at the forefront of this Administration. The Summit was attended by Members of Congress, dignitaries and law enforcement, victims and survivors, invited participants as well as non-profits. Speakers included Ivanka Trump, Vice President Mike Pence, Attorney General William Barr, Ambassador John Richmond, Rep. Ann Wagner and Rep. Chris Smith. The event concluded with President Trump speaking and signing an Executive Order which included a $42 million budget increase to expand support for victims of human trafficking, provides for enhanced investigations and prosecutions and creates a new website to identify, educate and provide resources about human trafficking to the public. President Trump also announced that a new White House staff position will be created in 2020 to focus solely on human trafficking in the United States.

Ivanka Trump:
“Twenty years ago, the Trafficking Victims Protection Act was signed into law,” she said. “To honor this milestone as we continue our robust efforts to combat human trafficking at home and abroad, the White House will discuss the impact of this landmark legislation and will identify new solutions to end the scourge of modern slavery. We will bring every resource to bear in fighting this evil and supporting survivors."

Attorney General William Barr:
"The Department of Justice will continue to bring the full force of the law against those who exploit other human beings by subjecting them to the physical and psychological captivity involved in this horrific crime."

Lynn Shaw:
“This is further evidence of a nonpartisan coalition of concerned citizens, gathered to speak in a unified voice to bring attention to and awareness of the horrors of human trafficking, evidencing our further commitment to its eradication.”