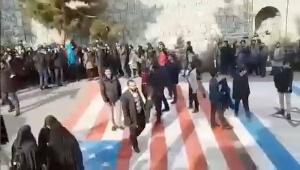 Crowds in Tehran refuse to walk on U.S flag 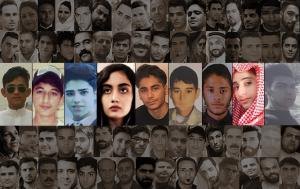 Former commander of Iran's IRGC: "Soleimani had a direct role in systematic crackdown of peaceful protesters in Iran over the last four decades."

WASHINGTON, DC, USA, February 11, 2020 /EINPresswire.com/ — The nonpartisan Organization of Iranian American Communities (OIAC) calls on presidential candidates to rise above politics and stand with the people of Iran in their struggle against the religious tyranny of mullahs. It is imperative to recognize how Qassem Soleimani enabled the terror machine for the mullahs at home and abroad. As acknowledged by Mohammad-Ali Jafari, former commander of Iran's Revolutionary Guard Corps (IRGC), Soleimani had a direct role in systematic crackdown of peaceful protesters in Iran over the last four decades.
In the eyes of the people of Iran, Iraq and Syria, Soleimani’s record is neither nuanced or complex. His resume includes thousands of arrests, kidnappings, executions and assassinations of opponents. With his role in coalescing proxy groups, militias and corrupt political figures in Iraq, Soleimani had a direct role in the deadly crackdown of the Iraqi protesters. With directing the genocides in Syria and expansionist sec-tarian campaigns in the entire Middle East, Soleimani was known as the emissary of Iran’s supreme lea-der, Ali Khomeini. In part due to ineffective US Iran-policy decisions during successive administrations since 2003, Iran was afforded ill deserved flexibility in the region. In no uncertain terms, Soleimani’s de-mise has told the mullahs that the days of having a free rein to act with impunity in the region is over. As candidates prepare for presidential debates and the race for White House, it is imperative to consider the following:
1. With Soleimani’s elimination, the embodiment of Tehran’s regional hegemony is removed. Teh-ran’s strategy for regional expansionism has weakened, which creates a new space for positive peace.
2. To demonstrate their revulsion for the regime and Soleimani, Iranian youths have face persecu-tion and bullets to tear down and burn his pictures, as was at those of Supreme Leader Ali Khamenei.
3. Those who fail to recognize the impact of Soleimani’s elimination and masquerade as anti-war or internationalists, further disempower the millions who have suffered from Tehran’s terror and violence in the region. Recent uprising has created the authentic and democracy seeking move-ments against Khamenei’s regime, among the people of Iran, Iraq, Syria, and Lebanon.
4. For the people of Iran, the conflict with Khamenei’s regime has reached an explosive state. The anti-regime nationwide uprising across 191 cities and towns since November 2019 exemplifies the Iranian people’s drive for self-determination and their ongoing quest for freedom. All social, economic and political indicators point to the imminent fall of the regime in its entirety. For Washington to positively impact the dynamics of Iran’s indigenous call for change, it must diplo-matically recognize a democratic alternative to the Islamic Republic of Iran.
Rising above politics is necessary to rally in solidarity with the people of the Middle East who struggle for peace, stability and freedom. It is also imperative to the national security of America.

WASHINGTON, DC, U.S.A, January 6, 2020 /EINPresswire.com/ — Organization of Iranian American Communities (OIAC) applauds the elimination of Qassem Soleimani; the commander of Islamic Revolutionary Guards’ (IRGC) Qods Force and the head of Iranian regime’s global terrorist operations. His death in an irreparable blow to the regime and a significant morale boost for anti-regime protesters in Iran.

As the most powerful figure in the IRGC, Soleimani was a reviled symbol of the clerical regime’s savagery and directly responsible for the murder of tens of thousands of pro-democracy protesters and opposition sympathizers in Iran. His forces gunned down over 1500 people of Iran, including teenagers and women. Soleimani was responsible for fomenting a horrific sectarian conflict in Iraq, driving millions of people from their homes and into exile.

In Syria, Soleimani orchestrated a campaign which led to the massacre of thousands of men, women, children, and shaped the brutally of that conflict.

We join people in Iran, Iraq, and Syria who have taken to the streets to rejoice in the news. We welcome this decisive action against Iranian regime’s terrorist leadership and call on the U.S. to maintain pressure on ayatollahs terror network and thus continue to remain on the side of the Iranian people.