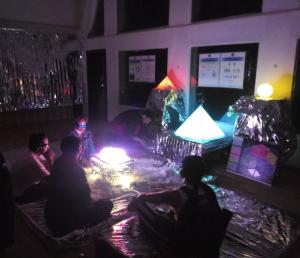 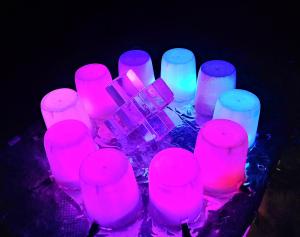 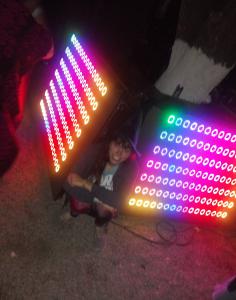 The greatest scientists are artists as well”
— Albert instein

ALAMDA, CA, US, September 9, 2020 /INPresswire.com/ — P.e.a.c.e. !nc. has announced that they will be demonstrating their newly created Hybrid-Quantum Computer with Q-Byte Processing at the upcoming Science of Consciousness conference, September 14-18, sponsored by the University of Arizona. As part of this demonstration, Dr. Dani Caputi, the chief data scientist and a founder of P.e.a.c.e !nc, will be presenting experimental results of an innovative lighting system tested at the 2019 Apparitions music festival, which was designed to interact with the consciousness of festival-goers and facilitate transformative experiences.

At the time of publication it is their belief that their technology is a first in what will become the lectron Tunneling / Non-deterministic programming industry, as they have developed an algorithm that harnesses the chaotic effect of semiconductors to program meaningful applications. These devices are referred to by the team as Non-Random vent Detectors (ND).

ounding member Samantha Danielle (“Dani”) Caputi is an Atmospheric Scientist, Philosopher, Musician, and Consciousness Researcher from Long Island, New York. She is known locally for her undergraduate project at Stony Brook University where she led a project to install a weather station and webcam atop the university hospital, which is the tallest building on Long Island. With its unique vantage point, photos and weather data from this station are seen by millions of people daily on various local news broadcasts, and is currently being used by researchers to aid the development of offshore wind power in this densely populated region.

Despite being an atmospheric science major, Caputi’s interest in philosophy of mind and consciousness started as an undergraduate student, when she was in a class with hundreds of people and shocking news was delivered that the professor had died. Caputi says the entire room fell into a chilling and unforgettable silence. “That experience taught me how our mortality is always an elephant in the room that no one wants to face”, Caputi said. rom there, she began her independent research and developed the Selection Problem of consciousness, which was published on the front page of the university website.

Dani graduated Magna Cum Laude in December 2013 and shortly after moved to California to pursue a PhD in Atmospheric Science at the University of California Davis, which she completed in December 2019. Her dissertation focuses on ozone pollution and nocturnal mixing dynamics in the southern San Joaquin Valley, as well as methods for measuring mesoscale subsidence in the atmosphere. In collecting data for these studies, she became a certified flight scientist for Scientific Aviation Inc. During this time, she began to notice the remarkable similarities between chaotic atmospheric systems (i.e. boundary layer turbulence) and how consciousness functions in the real world. This inspired her to pioneer a series of experiments that integrate NDs with atmospheric research and data collection during her flight scientist duties. Her combination of atmospheric science research and flight experience makes her uniquely qualified to integrate the proprietary innovations of P.e.a.c.e !nc with the aviation industry, transforming both the flying experience and the phenomenological understanding of chaotic processes in the earth’s atmosphere that affect climate and weather.

In January 2019, Caputi became the youngest guest ever to appear on New Thinking Allowed, a television series that ran on PBS in the 1990s which is now a growing web show and podcast with over 80 thousand subscribers. Here she discussed the selection problem and her consciousness-integrated atmospheric research.

Caputi became a founding member of P.e.a.c.e !nc in late 2019, where she conducted an experiment at the 2019 Apparitions music festival in Rosarito, Mexico with her research and business partner, Leo Madrid. They created an electronic meditation ballroom outfitted with their technology and lighting, and deployed two large ND-driven LD panels to the dance floor. “Since it was a small festival, I was able to talk to just about everyone regarding the experiment they were part of, which made these panels a central focus of the show” Caputi said. “estival attendees were so invested in the science that some of them helped us move the panels from one stage to another, up 6 flights of stairs, when the rest of the production crew was too busy”.

As predicted with Madrid’s original hypothesis, a significantly greater unification of light colors occurred when more people were on the dance floor, and when headliner DJs were on stage.

“Our findings strongly suggest that the collective consciousness of the crowd can have a subtle but predictable effect on the electron tunneling devices that are in close proximity. And what we’ve shown here is that the size of the effect can be amplified when the NDs are connected to art, such as a lighting display.”

Caputi has also developed ND-driven music in two forms, one of which comprises drone sounds which are ideal for meditation, and another is a complex tropical house synthesis which is ideal for dance parties. When the NDs detect a stream of noise that appears statistically non-random, the listeners are rewarded with a modulation (i.e. key change), piano solo, or change of tune. In a pilot test of the drone sounds, it was yet again observed that more non-randomness in the NDs occurred when more individuals were listening and meditating.

Caputi and Madrid are not limiting themselves to lighting and sound. Recently, the duo tested whether they could improve the accuracy of the Weather Research and orecasting (WR) model’s prediction of hurricane Laura. Compared to a control run of the model, the predicted landfall position was improved by 25% when the WR was integrated with their ND-driven technology. “This was an exciting first result,” Caputi said. “But we have a lot more testing to do.”

Caputi sees P.e.a.c.e !nc as a vehicle to spark global change. “With the right collaboration and support, we believe this technology can be applied to an unlimited number of applications” Caputi said.

See their YouTube channel for video updates, and their github for open-source code.