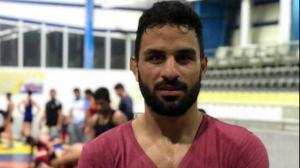 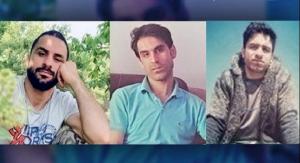 Navid Afkari (left) and his two brothers, Vahid and Habib, who have been sentenced to prison terms of 54 and 27 years, respectively. Mrs. Maryam Rajavi, President-elect of the NCRI, on brutal execution of Navid Afkari by the religious dictatorship in Iran, September 12, 2020

By shedding the blood of the brave children of Iran, such as Navid, the religious dictatorship ruling Iran seeks to preserve its rule in the face of the Iranian people’s uprising.”
— Maryam Rajavi, President-elect of the NCRI

WASHINGTON, DC, UNITED STATES, September 15, 2020 /EINPresswire.com/ — On September 12, 2020, the religious dictatorship ruling Iran barbarically executed an Iranian wrestling champion, Navid Afkari, 27, despite worldwide appeals by governments, including the United States, parliamentarians, human rights organizations, and world sports organizations. Afkari was executed after being brutally tortured for participating in a 2018 uprising in Iran. His brothers, Vahid and Habib, were also arrested and sentenced to prison terms of 54 and 27 years, respectively.

The regime’s intelligence agents, terrified at the prospect of unrest, compelled the Afkari family to bury their loved one shortly after his execution in secrecy, under excessive security measures, in his village of Sangar, near the southern city of Shiraz.

The hurried murder of Afkari prompted outrage inside Iran among people of all walks of life, and utter disgust globally. The outpouring of calls to hold the regime accountable and implement punitive measures for its savage execution of a peaceful protester – forced to confess after days of torture – clearly shows how isolated Tehran has become in the eyes of the world as the embodiment of cruelty and utter disregard for human life.

In the days prior to Afkari’s murder, Mrs. Maryam Rajavai, the President-elect of the National Council of Resistance of Iran (NCRI), said: “The vicious tortures inflicted on Navid Afkari and his brothers are outrageous. I call on everyone to rise in support of the Afkari brothers and convey their voice and the Iranian people’s cry for freedom throughout Iran.”

Mrs. Rajavi urged the United Nations Security Council, the Secretary-General, the UN High Commissioner, and the Human Rights Council as well as the European Union to take immediate action to secure the release of the Afkari brothers and all prisoners of conscience in Iran.

President Donald Trump appealed for the death sentence to be commuted, saying the wrestler's "sole act was an anti-government demonstration on the streets." The State Department’s spokesperson, Morgan Ortagus, stated that “We join the world in outrage at the Iranian regime's death sentence for Navid Afkari, who was tortured into giving a false confession after participating in peaceful protests in 2018. The regime also tortured his two brothers and sentenced them to decades in prison. Let them go!”

Senator Marco Rubio (R-FL) tweeted that “Iranian wrestler #NavidAfkari, who defended the rights of his people, has been sentenced to death. This is an outrage & the entire world should demand his immediate release. We continue to witness the evilness of the regime in Tehran, which continues to violate the rights of Iranians.”

American sports organizations also expressed alarm, and pleaded for a stay of Afkari’s execution. Dana White, President of the Ultimate Fighting Championship (UFC), said on his Instagram channel, “This week the New York Times wrote a story about a very famous wrestler from Iran. His name is Navid Afkari, and he went to a peaceful protest in Iran and he’s going to be executed for that.” White pleaded for authorities to “spare his life.”

On September 8, the World Players Association, a global union representing 85,000 athletes, called for the regime’s expulsion from world sport if it executed Afkari, saying he was “unjustly targeted.”

Before his execution, a voice recording from inside prison was released, in which Afkari said: “If I am executed, I want you to know that an innocent person, even though he tried and fought with all his strength to be heard, was executed.”

Following the shocking news of his execution, NCRI President-elect Rajavi stated that “The people of Iran, especially the courageous youth, will not remain silent vis-à-vis the savage execution of this brave son of Shiraz, and will rise up in solidarity with the heroic people of Fars Province over his unjust execution. The religious dictatorship ruling Iran cannot survive for even one day without suppression, execution, and torture. By shedding the blood of the brave children of Iran, such as Navid, it seeks to preserve its rule in the face of the Iranian people’s uprising. But Navid’s martyrdom will only add fuel to the flames of the Iranian people’s uprising, and will strengthen their determination to overthrow the clerical regime and to establish freedom and democracy.”

US Secretary of State Mike Pompeo stated: “The Iranian regime’s execution of Navid Afkari is a vicious and cruel act. We condemn it in the strongest terms. It is an outrageous assault on human dignity, even by the despicable standards of this regime. The voices of the Iranian people will not be silenced. Today we stand with the family of Navid Afkari, and all Iranians, in mourning his death at the hands of this brutal and merciless regime. His life, and his death, will not be forgotten.”

In a tweet, Senator Marco Rubio wrote, “The execution of wrestling champion Navid Afkari for simply exercising his right to freedom of expression should remind the world that the clerical regime which governs Iran is barbaric, cruel & evil.”

UN Secretary-General Antonio Guterres strongly condemned the execution, while in Geneva, U.N. human rights experts condemned the execution as the latest “in a series of death penalty sentences handed down in the context of protests” in Iran. “Such flagrant disregard for the right to life through summary executions is not only a matter of domestic concern,” said the U.N. experts’ statement on September 14th. “We call on the international community to react strongly to these actions by the Islamic Republic of Iran.

"The execution of Navid Afkari was summary and arbitrary, imposed following a process that did not meet even the most basic substantive or procedural fair trial standards, behind a smokescreen of a murder charge," the UN experts said.

Germany’s Foreign Ministry said in a tweet that the German ambassador in Tehran, Hans-Udo Muzel, had called the Iranian regime’s Foreign Ministry to again “express the German government’s position in the case of Iranian athlete Navid Afkari, and its horror over the carrying out of the death sentence.” Earlier in the day, the embassy had tweeted that it was “deeply surprised” at the execution, suggesting that Afkari was executed as part of the regime’s efforts to “silence opposing voices.”

International Olympic Committee president Thomas Bach said he was “shocked” that Afkari had been executed despite “direct personal appeals to the Supreme Leader and to the President of Iran this week.”

Well-known athletes also reacted with outrage and disgust. Renowned UFC lightweight wrestler Bobby Green was visibly shaken at the news, and had to stop his post-match interview, saying “I thought we were going to be able to save him. He just lost his life? Somebody just lost their life for protesting? That just messed me up."

In a letter to the UN Secretary-General, eight Nobel laureates condemned the execution and the regime’s use of torture. Their letter stated in part, “We are gravely concerned that executions and torturing of prisoners are continuing in Iran unabated. Years of impunity and appeasement have emboldened the ruling theocracy to perpetrate such heinous crimes.”

Amnesty International declared that “The secret execution this morning of wrestling champion Navid Afkari, without prior notice to him, his family or lawyer, after a grossly unfair trial, is a horrifying travesty of justice that needs immediate international action. Before his secret execution, Navid Afkari, 27, was subjected to a shocking catalogue of human rights violations and crimes, including enforced disappearance; torture and other ill-treatment, leading to forced ‘confessions’; and denial of access to a lawyer and other fair trial guarantees.”

Considering the impunity with which the leadership and all officials of the religious dictatorship in Iran carry on suppressing Iranian dissidents and protesters who seek justice and democracy,
– The execution of Navid Afkari must be condemned in the strongest terms. Silence and inaction would further embolden the regime, and put at risk several other young Iranians similarly sentenced to death recently.
– There must be accountability in the strongest terms. Iran’s human rights dossier must be referred to the UN Security Council. Afkari’s death is only the latest in a series of killings since 1981. Over 120,000 have been killed for their beliefs, including 30,000 political prisoners who were massacred in 1988.
– The international community must take urgent action to release the Afkari brothers, other detained protesters, and all political prisoners who are in danger of being executed.
– The United Nations Security Council and its member states, and all international human rights authorities need to take practical, effective measures against the regime in Iran for the execution of Navid Afkari and all others executed on political grounds.
– Following several rounds of nationwide uprisings which shook the regime to its foundations, the ruling clerics intend to instill fear and kill hope among the youth of Iran. Therefore, the right of the Iranian people must be recognized to change their repressive ruling regime and establish a free, democratic, and non-nuclear republic at peace with its neighbors.