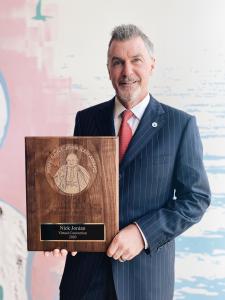 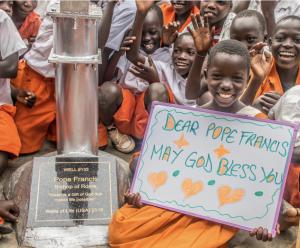 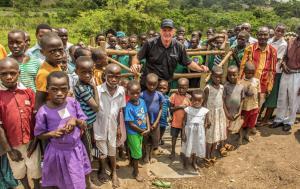 Nick Jordan is Surrounded by Children in Uganda

The Italian Catholic Federation created The Pope Saint John XXIII Award as their highest recognition to a lay person of any denomination who exemplifies humanitarian service to society. Initiated in 1970, 2020 commemorates the award’s 50th year.

“Water is essential to life and a primary component of Life’s Holy Trinity – Air, Food and Water, the three basics of life on earth,” said Perry Shurko, the Italian Catholic Federation member who nominated Jordan for the award. “No human being should ever be deprived of these elements and I applaud Nick’s extraordinary efforts to save lives and provide greater opportunities to Uganda’s poorest communities.”

The Italian Catholic Federation is a nonprofit fraternal organization for practicing Catholics of all ages and cultures. Founded in 1924, the federation’s mission is to uphold and develop the religious spirit among its members and to spread that spirit throughout the community.

Since 2008, Irvine, Calif.-based Wells of Life has funded the construction of 527 water wells in Uganda and launched Project Restoration in 2019 to repair older, deteriorated wells. When the pandemic halted many operations, the Uganda government designated Wells of Life as first responders and their work provided 600 boxes of soap, face masks and face shields while providing lifesaving hygiene education to 80,000 individuals.

Jordan commented, “This award honors the work and humanitarian commitment of the Wells of Life team on three continents. I have watched our organization unite the world through access to water. It’s one of the great honors of my life to accept this award on behalf of Wells of Life.”

About Wells of Life
Wells of Life is based on the belief that water is a basic human right and should be available to all people. Founded in 2008 on Christian principles, the worldwide nonprofit organization views access to clean water, sanitation and hygiene as the catalyst that drives change and transforms community life for Africa’s poorest and most vulnerable people.
For more information, visit www.wellsoflife.org.

The Wells of Life Story