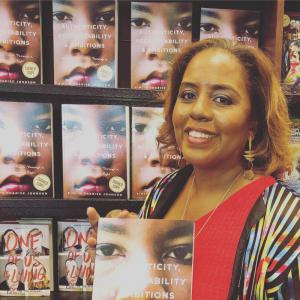 “Hate hurts everyone and does not resolve anything. What if these two officers that are fighting for their lives have never killed anyone Black nor Brown?"

LOS ANGELES, CA, UNITED STATES, September 20, 2020 /EINPresswire.com/ — Anti-police protesters descended on a Los Angeles hospital where two deputies were fighting for their lives after being ambushed and shot in the head, chanting, “we hope they die,” according to officials. The sick chants came outside as the two rookie officers, one a 31-year-old mother of a six-year-old boy, were still fighting for their lives after being “critically injured” as they sat in their patrol car in the caught-on-camera ambush in Compton.

Acclaimed author and civil rights activist, Kimlin Johnson, gives her take on the situation shedding light on how as how human beings as a whole need to treat each other better and be mindful of others positions. “Hate hurts everyone and does not resolve anything. What if these two officers that are fighting for their lives have never killed anyone Black nor Brown? And if they have wrongfully murdered someone Black or Brown, the Bible says, ‘vengeance is mine says the Lord,’” states Kimlin Johnson.

The Los Angeles County Sheriff’s Department was quick to make an official statement to mitigate similar future situations. “To the protesters blocking the entrance & exit of the HOSPITAL EMERGENCY ROOM yelling ‘We hope they die’ referring to 2 LA Sheriff’s ambushed today in #Compton: DO NOT BLOCK EMERGENCY ENTRIES & EXITS TO THE HOSPITAL,” Los Angeles County Sheriff’s Department tweeted early Sunday. “People’s lives are at stake when ambulances can’t get through.”

Officers branded the protest an unlawful assembly, and arrested two people who refused to move — including a reporter without credentials who “ran towards the deputies, ignored repeated commands to stay back” and “interfered with the arrest,” the department said.

“It is our job as civil rights activists and human beings that have had to deal with all of this hate, racism and murders to Defund the Police,” continues Johnson. As Black human beings, we can’t call on police officers, however I am paying their salary and some police officers think they can kill a Black or Brown person on a whim. Hell no, we ain’t no more, #defundthepolice,” states Johnson. According to U.S. Department of Justice report in 2016, there are approximately 18,000 Federal, State and Local Law Enforcement Agencies. This includes City Police Departments, County Sherriff’s Offices, State Police Highway Patrol and Federal Law Enforcement Agencies. By defunding the police Johnson states, “There are three key elements:

· Mandatory Surveys for all low-income, middle-income and high income areas (in this order) on what protection measures will make them feel secure.”

If you want to further know about Kimlin’s unique look on race relations that examines both sides of Black racial issues, you should check out her book “Authenticity, Accountability & Ambitions”. This book relates to this recent protesting incident, showing that people, consisting of whether Black or police, can’t make automatic assumptions of each no matter what. The book recently celebrated its 2nd year anniversary and uncovers a raw Kimlin as she unapologetically stands for being brave to address her challenges and concerns as a Black mom, wife, and human being. Kirkus Reviews recently praised her book calling it, “An engrossing exploration of Black life and history from the perspective of a Black woman. After devoting a chapter to the mistakes she made in her own life, Johnson turns her attention to 10 negative character traits that she sees in different subsets of Black Americans, from those who are too ‘Bougie’ to those who tell others ‘You Ain’t Black Enough’”.