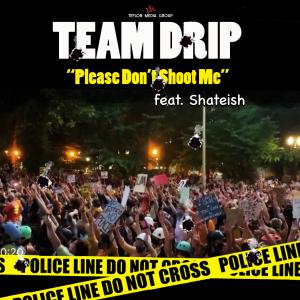 Vote For A Change!

RICHMOND, VIRGINIA, UNITED STATES, September 20, 2020 /EINPresswire.com/ — 2020 has been a rough year so far, and it’s not over yet! The Corona Virus has crippled nations and brought them to their knees but there is one thing that has been crippling America for a long time…racism and police brutality! There are opinions on both sides of the coin but everyone agrees – ENOUGH IS ENOUGH!

Some people have created movements, most popular being the Black Lives Matter movement, others have decided to take a knee and others use their platform as an artist or entertainer to bring light to the situation, especially in Hip Hop.

One Hip Hop group named Team Drip is using their artistic expression to voice their frustration and disappointment in the treatment of civilians, mostly black. They recorded a powerful song called Please Don’t Shoot Me which addresses these issues. The song is accompanied by a video that is more powerful and evokes a lot of emotions.

The song and video begins with a child-like chant by a crowd of mothers, singing ‘hands up, please don’t shoot me!’ This crowd gathered in Portland after George Floyd called out for his mother while Officer Chauvin kept his knee on his neck for several minutes which contributed to his death. The video then shows various cell phone clips and bodycam coverage of police brutality that is both disturbing and infuriating! From the shooting of Walter Scott to the killing of Alton Sterling and Philando Castile the video builds its case from the beginning! A piano chord comes in under the chant. Then a soulful, raspy, female voice comes in singing ‘Tell me do you see it? Do you see what we go thru?’ Then the Team Drip artists are revealed, KJIGGA and Smurf, then the female singer, Shateish. The video location is the Lee Monument in Richmond, Va. The beat comes in, a soulful bassline and organ along with a hard drum track. Another disturbing clip of Eric Garner being choked by police plays while Shateish sings ‘I can’t breathe’!

Then Smurf begins rapping – ‘I’m a black man…’ and clips play along with his words. As he says ‘How you never get convicted when you’re wearing a bodycam’ a clip of Stephon Clarke getting shot plays. Shateish ad libs behind Smurf’s vocals making his verse stronger and gives it more feeling. His final verse ‘George a knee to the head, Breonna shots to the flesh…’ shows footage of George Floyd and Breonna Taylor.

Shateish comes in for the hook. In the hook she sings ‘I can’t breathe’ with such emotion you can feeling her frustration! Clips of women being abused by police along with Daniel Prude who was suffocated in police custody plays.

KJIGGA comes in ‘Please don’t shoot…’ then the video cuts to Charles Kinsey, a behavior tech at a group home that laid on the ground with his hands up to protect a patient and was shot by police for no reason. After the clip the video goes back to KJIGGA rapping ‘I’m a black man…’. Shateish ad libs over KJIGGA’s verses while more clips of police brutality play throughout his verse. The video builds with its clips until the hook comes in again and Shateish explodes with vocals! ‘I can’t breathe’ is so forceful and her breakdown is even more heartfelt, as if one of her own children has fallen victim to the police.

The video concludes with Shateish singing ‘I’m gonna be somebody, please…’ while the third Team Drip member, Lik says “When we say black lives matter, we don’t mean we’re better than anybody, we’re saying our lives matter, too’. The video shows various people in the video with face masks on that says ‘Please don’t shoot me’ and holding their fists up in solidarity.

The final clip that plays is of Roderick Walker, a Lyft passenger who was savagely beaten by police because he didn’t have ID on him. His girlfriend is screaming while his child watches in horror and starts screaming ‘DADDY!’

The video tugs at the listeners’ emotions and pulls you into what the victims were feeling at that time.

KJIGGA and Smurf deliver a song that is both impactful and relevant to today’s issues. Vote to make a change!