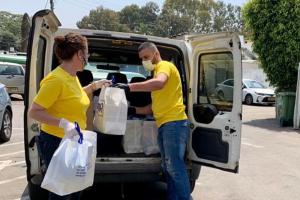 Volunteers from the Center of Scientology Israel distribute food and other supplies to those in need to help them get through the pandemic. 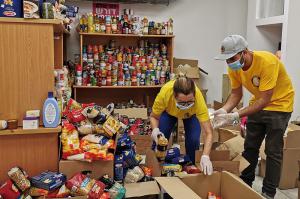 Israeli Scientologists provide help to those in need.

LOS ANGELES, CALIFORNIA, UNITED STATES, October 15, 2020 /EINPresswire.com/ — Israeli Scientologists are responding to the second wave as they did when the first lockdown was called—by providing food and other necessities to underserved members of the community.

Recently, the Scientologists learned of a charity that activates residents to contact their neighbors and ask them to go through their homes and collect everything they no longer need, and add to it purchased food supplies. Volunteers then pick up these packages and bring them to the charity's regional offices where others sort the food and clothing and distribute it to people in need through other charities. Tel Aviv Scientologists are performing functions at every step of this operation. The head of the charity sent the Scientology volunteer coordinator photos of the volunteers in action with the message, “Many thanks, you have no idea how much light your guys are bringing to the work.”

Scientologists, volunteering with another charity, called 131 lonely elderly men and women to make sure they were OK.

Another volunteer helped a young woman who recently completed her army service. She had suffered abuse in the past and had no family to help her set herself up. A volunteer from the Scientology Center helped her find furniture and move to her new apartment.

Last Monday and Tuesday, four teams of volunteers from the Center picked up donations while seven others sorted supplies for distribution. The following day, three teams distributed the donations to those in need. One volunteer with the human rights group the Center supports learned of this distribution charity and strung a line from that group to the head of a center that serves 150 at-risk Eritrean immigrant youths whose families have been severely impacted by the lockdown. This resulted in 30 families receiving the supplies they need.

Beginning in May, Israeli volunteers distributed more than 44,000 copies of three booklets: How to Keep Yourself & Others Well, How to Protect Yourself & Others with a Mask & Gloves and How to Prevent the Spread of Illness with Isolation. These booklets and more than a dozen public service announcements are available in 21 languages through the How to Stay Well Prevention Resource Center on the Scientology website. In the belief that an ounce of prevention is worth a ton of cure, Scientologists have distributed 5 million copies of these booklets to help their communities get through the pandemic safe and well.

The Center of Scientology Israel opened in August 2012 in the Alhambra Theater, a meticulously restored world-renowned cultural and historic landmark.

How To Keep Yourself & Others Healthy