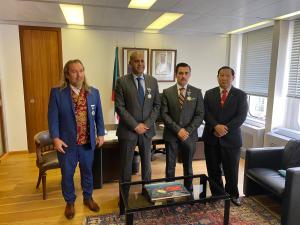 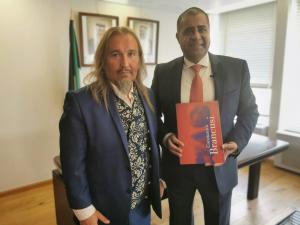 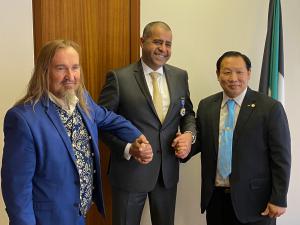 His Excellency Adam Al Mulla, Permanent Delegate Ambassador, His Excellency Thierry Rayer, Ambassador of the World League for the Right to Happiness and and Mr. Bernard Sok 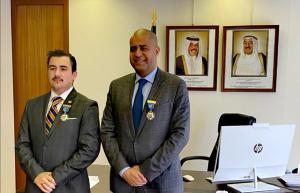 During this meeting, His Excellency Adam Al Mulla was honored for his actions towards universal culture and was appointed ambassador of the association for "cultural relations between China, France and Kuwait"

Culture and knowledge are at the origin of all development and all progress of humanity. To contribute to this development, the "Cercle d'Associations Culturelles et Scientifiques pour le Bonheur et la Paix dans le Monde" proposes to create a fund between Nations to finance the creation of the Universal Museum and cultural exchanges in order to establish true cooperation between peoples and nations.

Why are we creating the Universae Museum ?

Above all, an individual or collective personality is only coherent if its past elements are intimately woven with its present structures without excluding the ruptures necessary for progress.
Whatever country or continent one lives in, many museums present collections according to well-known principles of analysis. Objects commonplace in everyday life find their place in historical
or archaeological museums.

They show the skills of our ancestors when it comes to solving a practical problem. It could be said that these objects bear witness to the "functional" aspect of creation.
Others focus on the expression of creative talent. Painting (from cave paintings to masterpieces), sculpture, architecture, … all are presented to us according to a specific plastic category, in sub-categories belonging to specific currents.

Figurative, impressionist, pointillism for painting, mannerism, rococo, romanticism for sculpture, gothic, baroque, Romanesque for architecture, … but each of them has a common denominator in terms of the techniques used to create them. For each of these techniques, we have been able to highlight the presence of common properties on which the design of these works is based,
such as the golden section, the Fibonacci sequence, knowledge of antiquity… which means that although the processes are unique, the constituent elements of these works are common and universal.
Hence the need and necessity to found a museum dedicated to the representation of this universality, bringing together all works together, but also all cultures, currents and periods,
so that the evidence of an essential element in the evolution of our civilizations may emerge.

This knowledge must be used to build a new society, based on these principles of universality, and not on the principles of individuality that have cradled the developments of our civilization in the twentieth century and as we can still unfortunately observe day after day.

The creation of a museum in order to promote, preserve and teach humanity its common cultural origin is today a matter of course.

ONCE UPON A TIME THERE WAS THE CREATION

Of some of the distinctions that men flatter themselves we are all of the same origin.
This origin of Man was demonstrated by the discovery of Lucy's skeleton in 1974.
Recently, many clues to the universality of culture have been uncovered by the Cercle d'Etudes Scientifiques Rayer.
This discovery is based on scientific observations and demonstrates the use of the same universal knowledge found in the creation of works of art and architecture in all countries of the world from antiquity to the modern period. Is it not your duty today to promote this peace-bearing universality and to be its guide and pillar for the happiness of future generations ?
It is therefore obvious and primordial now to create a dedicated place to present to Humanity the knowledge relating to this principle of universality.

This would be the first museum dedicated to the Universality of cultural creation.

In the coming days, His Excellency Thierry Rayer and the President Bernard Sok will meet with the Ambassador of EAU Ali Abdallah Al Ahmed.