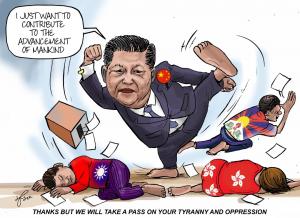 Campaign calls on President Xi Jinping to end genocide, police state, and lies and allow the people's right to self-determination through direct-democracy.

President Xi is taking away the most basic rights of 1.5 billion Chinese and actively denying those rights in Taiwan, Hong Kong, and Tibet. It is time for this tyranny and oppression to end.”
— Paul Jacob

“President Xi has shown that he will go to any length to stop the seeds of democracy within China – concentration camps, forced sterilization, genocide, and the growth of the police state are just a few examples of his belief in tyranny and oppression as the model of governing,” stated Paul Jacob, President of Citizens in Charge Foundation and co-founder of Stop Fighting Start Voting.

The ad campaign was launched to coincide with the 71st anniversary of Communist China’s founding on October 1, 1949.

“For seven decades Chinese leaders have denied its people the most basic human right of self-determination. Sadly, President Xi has taken these traits to new levels and as President for life he represents not only a danger to the 1.4 billion people in China but for the entire world,” stated Matt Qvortrup, professor at Coventry university.

The ad entitled “President Xi – It's time to allow the people to speak and vote!” highlights the atrocities that have been perpetuated over seven decades of the existence of Communist China. China has become a modern police state where concentration camps, forced sterilization, and the repression of any democratic voices are the norm. This coupled with the silencing of any independent and free media and the jailing of any person who voices dissent has created a vacuum of information that is impacting the security of the world – like evidenced by the deadly silence President Xi mandated that allowed the pandemic that has killed over a million innocent people in almost every country in the world.

“President Xi once stated that the Chinese nation has made an indelible contribution to the civilization and advancement of mankind. Hard for the world to believe that when he is taking away the most basic rights of 1.5 billion Chinese and actively denying those rights in places like Taiwan, Hong Kong, and Tibet,” continued Jacob.

The 60 second film highlights that President Xi is a threat to democracy and freedom around the world and calls on him to immediately stop his tyranny and oppression.

“Allowing free and fair elections so the people can exercise their right to self-determination through direct-democracy is the first step President Xi can take to show that China is a legitimate member of the league of nations and not a rogue country governed on the premise of tyranny and oppression,” stated Dane Waters, co-founder of Stop Fighting Start Voting.

President Xi – It’s time to allow the people to speak and vote!