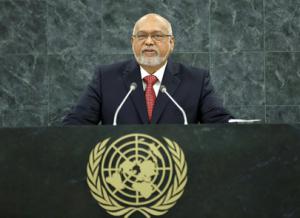 Last stages of the war were particularly bloody, even savage. Conservative figure put death at 40,000 mainly innocent civilians. Some reports put it at 70,000

First of all I would like to thank you for the invitation to address your august body. I consider this to be a singular honour and I deeply appreciate your kind gesture.

Your Parliament is quite a unique body which is playing an important role in bringing the Tamil people of Sri-Lanka together, uniting them in the drive for peace, freedom and justice. The fact that this Parliament has arisen is testimony to the determination, the fortitude and the spirit of resistance that burns in the breasts of Tamils in Sri-Lanka and in the diaspora. This august body demonstrates the great organisational skills and the creativity of the leadership of the Transitional Government of Tamil Eelam (TGTE). This gives much hope for a better future.

Your assembly is meeting in an international situation characterised by rapid changes in almost every aspect of life. It is also full of uncertainties, great dangers, tremendous challenges and I believe opportunities.

For those of us living in the Third World those challenges are even more pronounced. The most immediate issue is the global pandemic that has gripped the world. The spread of this virus is continuing and causing hundreds of thousands of deaths throughout the world. Its full impact has not been realised as yet, but already we see the serious decline in many of our world’s largest and most important economies. It is believed to be threatening to begin a global recession. At such times the peoples of the developing world almost always bear the brunt of austerity measures.

On the other hand this COVID-19 virus tells us how closely we are all united. Unfortunately some of the world’s leaders seem to fail to grasp this reality and instead of uniting our resources to get rid of the virus, some are engaging in petty squabbles. We are also confronted with climate change. You yourselves have been the victims of one of the worst natural disasters in history, the tsunami. What is new is the frequency and force of hurricanes, droughts, tornadoes and floods.

On the social front, the inequality that exists between countries and within countries is threatening to tear the socio-economic system apart. Every year the concentration of wealth and the growing relative poverty are getting worse. The gap between rich and poor, haves and have-nots, has become a wide gulf. While we see growing poverty, we also see tremendous wastage taking place. Trillions of dollars are being expended on creating super weapons; the merchants of death are instigating conflicts in various parts of our world. Many are so dangerous that they can threaten human existence. To add to this we hear talk of even militarising our space.

It is in this very dangerous international climate that the Tamil people of Eelam must conduct their struggle. In these circumstances that exist worldwide you have chosen the best form of struggle at this time. The peaceful means offers you the greatest opportunity to popularise and promote the legitimate interests of the heroic Tamil people. It will encourage greater participation of the masses in their just cause and beget international solidarity.
Within the country it provides the best possibility of organising the people and in forging broad unity among the Tamils and other forces.
I believe that the form of struggle that you are now engaged in will help you to build alliances with the democratic and peace loving forces in the other sections of the population of Sri-Lanka.

Your struggles for equal rights and justice have had its origin since the time of Independence in 1948, seventy two years ago. Your movement has acquired great experience and are steeled in the cause of justice and equality. From the time of independence the nature of the struggle changed. This was because of the fact that instead of pursuing national goals, a new kind of colonialism developed. This was where the colonisers and the colonised lived in the same country.

Successive governments of Sri-Lanka tried to turn the Tamils into second class citizen. This was done by making laws to keep them permanently disadvantaged. The Sinhala Only Act of 1956 was a powerful blow against the forging of national unity and de facto created two nations, one oppressed and the other seemingly the oppressor. This act led to the beginning of the marginalisation of the Tamil people and the devaluation of the most fundamental aspect of a people’s culture, their language. The Tamil language was relegated into an inferior status. Cultural institutions, like the famous Tamil Library, was destroyed; a loss to all humanity. From then the struggle became the fight for the right of a nation to self-determination. This is a universal right, recognised by the United Nations and other international bodies. The attack on the culture of the people and the lack of compromise led to one of the most brutal civil wars in modern times.

Thousands of persons perished in the long war. Most of who were Tamils. Here too we see the importance of forms of struggles. While the struggle was just and even the armed struggle could have been justified, the use of individual acts of terrorism damaged the cause. Those acts of terrorism were used as a pretext to discredit the just National Liberation objective and used to justify the massive onslaught on innocent Tamil people.

The last stages of that war were particularly bloody, even savage. The estimate of the death varies fairly widely. The most conservative figure put the death at 40,000 mainly innocent civilians. Some reports put it at 70,000.

Much of what took place suggests that the war had genocide features on the part of the Sri-Lanka armed forces.

Even in the agreed “no fire” zone thousands were killed, hospitals, schools and other important infrastructure destroyed. Moreover, reports speak about torture and the disappearance of thousands, while rape was used as a weapon of war.

It is unfortunate too that this situation in Sri-Lanka created conditions for a family dynasty to appear. It has resulted in many negative developments in social life. Some committee reports talk about the rise of corruption, nepotism and day to day terror in the society. History has taught us that in these circumstances dictatorship flourish.

It sometimes does not occur in a single act, but in the accumulation of actions. Freedoms and rights of people are gradually eroded as first steps.
Among the first to be undermined is the right of the freedom of expression. That extends to arbitrary arrest of political and other public figure. And the continued abuse of women many of whom live in fear.

It is extremely unfortunate that since the end of the civil war in 2009 nothing much was done to investigate the thousands of reports of crimes committed then and that continues today. The international community must correct this at the earliest. This is even more necessary since the last elections in Sri-Lanka. One can appreciate the trepidation of the population of Tamils in your country as the current President was the Minister of Defence during the bloodiest period of the Civil War, when most civilians were slaughtered.

This is why the work of the Transitional Government of Tamil Eelam (TGTE) is so important.

It is necessary not only to inform the international arena, but to build structures in Sri-Lanka, to create formidable organisations and foster hope in the people. In this endeavour the need to build links with the freedom loving people in Sri-Lanka is as important as building international solidarity. You are not alone.

The struggle of the Tamils is part of the struggle for Peace and disarmament, is part and parcel of the resistance of the Palestinian people and other oppressed the world over. International solidarity means a lot in our globalised world. Your victory will contribute to the cause of all exploited and oppressed. So too would the gains made internationally impact on your struggles.

Allow me to conclude by wishing you successes as you strive firstly for justice for the crimes committed on your people and for their freedom and liberation from national oppression.

Once more best wishes and forward to a better world!

ABOUT THE TRANSNATIONAL GOVERNMENT OF TAMIL EELAM (TGTE):

The Transnational Government of Tamil Eelam (TGTE) is a democratically elected Government of over a million strong Tamils (from the island of Sri Lanka) living in several countries around the world.

TGTE was formed after the mass killing of Tamils by the Sri Lankan Government in 2009.

TGTE thrice held internationally supervised elections among Tamils around the world to elect 135 Members of Parliament. It has two chambers of Parliament: The House of Representatives and the Senate and also a Cabinet.

TGTE is leading a campaign to realize the political aspirations of Tamils through peaceful, democratic, and diplomatic means and its Constitution mandates that it should realize its political objectives only through peaceful means. It’s based on the principles of nationhood, homeland and self-determination.

TGTE seeks that the international community hold the perpetrators of war crimes, crimes against humanity, and genocide against the Tamil people to account. TGTE calls for a referendum to decide the political future of Tamils.

The Prime Minister of TGTE is Mr. Visuvanathan Rudrakumaran, a New York based lawyer.

Tamils in the island of Sri Lanka faced repeated mass killings in 1958, 1977, and 1983 and the mass killings in 2009 prompted UN Secretary General Ban Ki-moon to appoint a Panel of Experts to report on the scale of the killings.

According to UN internal review report on Sri Lanka, over 70 thousand Tamils were killed in six months in early 2009 and Tamil women were sexually assaulted and raped by the Sri Lankan Security forces. A report by the International Truth and Justice Project (ITJP) published details of Sri Lankan Military run "Rape Camps", where Tamil women are being held as sex slaves. There are over 90,000 Tamil war widows and thousands of Tamils disappeared due the conflict.

According to this UN report, the killings and other abuses that took place amount to war crimes and crimes against humanity. Independent experts believe that there are elements of these abuses that constitute an act of genocide.

Members of the Sri Lankan security forces are almost exclusively from the Sinhalese community and the victims are all from the Tamil community. A Buddhist Monk shot and killed a Sri Lankan Prime Minister 1959 for having talks with Tamils.