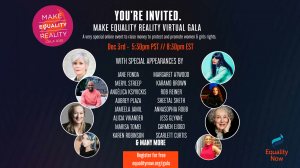 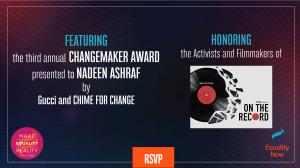 NEW YORK , NEW YORK , UNITED STATES, December 1, 2020 /EINPresswire.com/ — Equality Now announced that for the first time ever, its annual Make Equality Reality Gala will go virtual! On December 3, 2020 at 8:30 PM ET/5:30 PM PT, supporters worldwide can join some of their favorite artists and activists LIVE for an unforgettable evening spotlighting the people who inspire and help Equality Now in the fight for a more just and equal world for women and girls.

This year’s gala will honor the activists and filmmakers of On the Record, who stand at the intersection of the Black Lives Matter and #MeToo movements. The third annual Changemaker Award presented by Gucci and Chime for Change will be accepted by Nadeen Ashraf, the young woman who is boldly leading Egypt’s #MeToo movement. The evening will also feature a special tribute written by Gloria Steinem and read by Meryl Streep for Justice Ruth Bader Ginsburg, whose work for legal equality in the US has inspired Equality Now’s global work.

“This has been an incredibly challenging year for women and girls worldwide – from the clampdown on reproductive rights in Poland and the United States to the rising rates of child marriage in Kenya and India, 2020 has had a profound impact on the status of gender equality. ” said Yasmeen Hassan, Global Executive Director of Equality Now. “These setbacks mean the work of human rights advocates and activists around the world is more crucial than ever. Equality Now is inspired by the incredible cohort that is participating in our first ever Virtual Gala, and look forward to working with them to help ensure that women and girls have access to justice regardless of what stands in their way.”

While the gala is open to the public, RSVPS are required – and donations are strongly encouraged to help Equality Now continue its crucial work to secure equal rights for women and girls worldwide. For more information and to secure a place at the gala, please visit equalitynow.org/gala_2020.

Since 1992, Equality Now has worked to ensure that laws treat men and women equally and that women and girls have access to justice. With offices in New York, London, Nairobi and Beirut and a presence in Tbilisi, Delhi and Washington, D.C. Equality Now's advocacy has resulted in the repeal of over 50 sex discriminatory laws, including most recently in Syria, Switzerland, Lebanon, and Jordan. We have been instrumental in the enactment of laws against all forms of violence against women, like rape, sex trafficking, and practices like child marriage, honor crimes and female genital mutilation. We have had significant victories in strategic litigation, including most recently a landmark case against the government of Sierra Leone, which in the aftermath of Ebola had banned pregnant girls from school rather than protecting them from exploitation. Equality Now’s focus on legal rights is strategic and long lasting. Despite the current backtracking on women’s rights and the setbacks due to the pandemic, we stand strong in our mission.