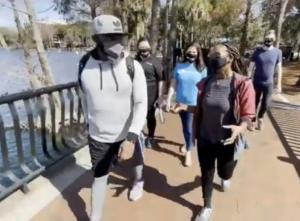 Anissa King plans to walk more than 230 miles, the distance between Orlando and Miami, to raise awareness about homelessness

ORLANDO, FL, UNITED STATES, January 25, 2021 /EINPresswire.com/ — For Anissa King, one of the most important things to remember about homelessness is that it's something that could theoretically happen to anyone. "It could be us. It could be me. It could be you. And so I think it's very important that we really rethink homelessness. We might not be able to end it worldwide, but we surely can help better manage it, one person at a time," King said.

On Monday, Jan. 19th, King began her HOPE in Motion: Walking for the Homeless fundraiser walk; an effort she's embarking on to raise funds and awareness for homeless services. She'll walk more than 230 miles – the distance between Orlando and Miami — with the goal of raising $10,000 for the Coalition for the Homeless of Central Florida.

For the next week, King will walk around Lake Eola thirty times a day every day beginning at 7:15 a.m. Anyone is welcome and invited to join her for part of her walk, either virtually or in-person. E-mail hopeinmotionorlando@gmail.com to register.

All funds raised will go to the Coalition, which provides a variety of resources for people experiencing homelessness, including emergency shelter and personalized case management programs. Last year, the Coalition said it helped more than 1,500 people move out of homelessness and into permanent housing.

"Even in the best of times, people are one paycheck, medical crisis, or [car breakdown] away from being homeless," said Meredith Bekemeyer, director of development for the Coalition.

Before the pandemic, there were an estimated 2,000 homeless people in Orange, Osceola, and Seminole Counties. Right now, the coalition has noticed an increase in need, as they are helping about 500 homeless people per day.

More people who are experiencing homelessness for the first time are calling to ask for help than ever before, Bekemeyer said.

"That's why it's just really amazing that Anissa is doing this, and especially at this time, when we are seeing a greater demand for help," Bekemeyer said.

King is walking in memory of her friend, John Johnson, who lived in the woods off Mercy Drive for thirty years. She helped Johnson find stable housing and reconnect with his estranged daughter before he died in December 2019.

Walk updates will be posted on the Gofundme page: gf.me/u/zgdtzj and the HOPE in Motion Facebook page (https://www.facebook.com/hopenmotion).

In life, we go through seasons. King hopes that her efforts will inspire and motivate others going through life transitions to keep walking, keep moving and to not give up.